A woman goes missing from a small French village in the middle of a snowstorm in Only The Animals. The story is told from five different angles as the pieces of the puzzle all fall into place.

Set in a small rural French farming village, Only The Animals (Seules Les Bêtes) drops you straight into the middle of a story with no explanation as to what exactly is happening. Confusing at first as you try to figure out what is going on, the plot does become clear and it's at this point that you realise how clever it is.

Basically, Alice (Laure Calamy) is married to Michel (Denis Ménochet). They live on their dairy farm with her father. But Alice is also having an affair with loner Joseph and that is the point where the story starts. A blizzard has hit and a woman visiting the town, Evelyne Ducat, has gone missing. Her car has been found but the police have found no trace of her. This is the story from Alice's perspective.

Then Only The Animals changes direction and it becomes Joseph's viewpoint. We see almost the exact same story about the missing woman but what happened from his perspective, filling in some of the missing details. While we get more info, we still don't see the big picture. Suffice to say though that Joseph has some real issues!

Next up is Marion. She is a young waitress who had a fling with Evelyne and unable to let her go, follows her to the village. But Evelyne is a married woman who doesn't want to continue the relationship leaving Marion alone and grief-stricken.

Then we have Armandine. This is also when we get to Michel's story. The two have been communicating online and without giving too much away, all is not what it seems. However, this is the point at which the entire story comes together. Five people, across two continents, create a unique set of circumstances that leads to the death of Evelyne Ducat.

Only The Animals is a really solid crime drama. The characters are unusually normal, living unextraordinary lives. But through secrecy, miscommunication, and the boring humdrum of everyday life, a well-crafted story is told from five different angles (similar to I See You). It is an intriguing plot that draws you in as more details of the crime are revealed but all with a subtlety and a lack of high octane drama that makes it a really good watch. 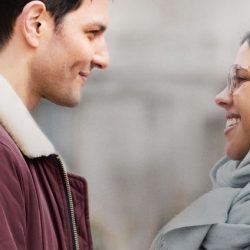