Onward follows the Pixar journey of Ian and Barley two brothers who discover that their father, who died years earlier, left behind magical gifts along with a spell that will resurrect him for one day only. A really great family movie that will tug at the heartstrings.

If there is one thing that Pixar have nailed more than any other studio it is the normalcy of family. This has gotten a little swamped in their deluge of sequels that, more often than not, proved the phrase ‘diminishing returns’ correct. Yet with Onward, the magic has returned.

Onward is set in a modern fantasy land. Centuries ago, magic and wizards were common among the unicorns, cyclopes, centaurs, and goblins. But as people gradually invented much more convenient things like lightbulbs and stoves the need for magic disappeared. This is all explained in a quick and easy opening scene before we are introduced to the Lightfoots: a family of elves missing a father. Ian (Tom Holland) is about to turn sixteen and is trying to overcome his timid personality, which is difficult with boisterous older brother Barley (Chris Pratt) sucking up all the confidence in the room.

Although there is a mother character as well (Julia Louis-Dreyfus) it is the core dynamic between Barley and Ian that makes up Onward, mixed in with the tried and tested road trip formula. The patriarch of the family passed away before Ian was born but left behind magical gifts along with a spell that will resurrect him for one day only. Ian’s surprise at discovering he has magical ability doesn’t prevent the spell from going wrong. Well, half wrong. The boys’ father does indeed return, except it’s just his legs running around, confused. The clock is now ticking to find another magical doohickie so that his top half can be brought back as well before the 24 hour period is over.

This is where the differing personalities of the siblings kicks in. Ian may be shy but Barley’s exuberance is matched only by his obsession with a Dungeons & Dragons style game which just so happens to have made him an expert on how magic is supposed to work. It is refreshing that director and co-writer Dan Scanlon didn’t resort to typical ‘nerd’ tropes for Barley. He is portrayed as big, loud and bursting with friendliness which is a far cry from how you would usually see a character that enjoys table top role player gaming. We also learn that he was just old enough to have only three memories of his father, which plays the heart-warming card early on.

For a good chunk of the movie, there is little to surprise you. Ian’s desperation to see his father for the first time is hampered by various setbacks such as angry (but tiny) biker punk fairies; run-ins with stepdad/police officer/centaur Colt (Mel Rodriguez), and Ian struggling to follow Barley’s enthusiastic guidance on how to cast spells.

This all plays out with well-tested fun and warmth, although lacking the originality or awe of the mindscape in Inside Out, or Land of the Dead in Coco. The two brothers don’t so much bicker, more that Barley’s ‘trust your gut’ approach is at odds with Ian’s nervous doubt. Even if the series of events that befall them aren’t eye-popping or slap your thigh surprising, the road trip/quest formula gives good satisfaction as they progress.

Where Onward gets you is how many Pixar films get you: emotions that grip hard and don’t let go. As time to fully resurrect their father slips away, the dynamic of Ian crossing items off a list of things to do with the dad he never met is desperately sad and relatable. Similarly, when Barley opens up about his regrets when their father was sick, it is hard not to be wrapped up in the sheer everyday believability of these emotions – fantasy land and elves notwithstanding.

Come the final act of the movie, which must surely feature the most comically constructed dragon ever committed to film, the heartstrings are pulled good and hard. And I mean it when I say good and hard. Onward may not have the deeper lament on death and remembrance that Coco pulled off, but it has a truly sob-worthy and touching ending which falls on the right side of respectful given the subject matter.

I went into Onward expecting standard Pixar fare. And it is. But I came away from the journey appreciating that sticking to the formula works just fine if you inject enough reality of emotion. Onward is skilfully written enough that normality is magically woven throughout the fantasy. 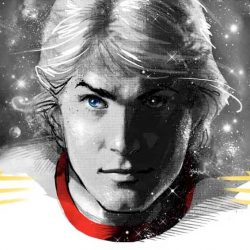