When Kate gets stung by a selfish, spoiled, rich playboy, she soon gets her revenge. Realising he has fallen overboard from his yacht and has no memory, she pretends they are married and puts him to work for the first time in his life. This is a remake of the 1987 Goldie Hawn movie and terrible one at that. Utter rubbish.

It truly was a low point in my life when I decided to watch Overboard on Netflix. The 2018 version, which is a re-make of the Goldie Hawn and Kurt Russell 1987 movie, is utterly awful. Starring Anna Faris, Eva Longoria and Eugenio Derbez, it's so bad I wished I'd been thrown overboard by the time the movie ended.

Kate, played by Anna Faris, is a single mum of three kids. Working two jobs and trying to study to become a nurse, there is simply not enough hours in the day. She works as carpet cleaner and a pizza delivery girl. And her mother who was supposed to help has bailed in search of an acting career.

She ends up with a cleaning job on a luxurious yacht. But when Leonardo, a selfish, spoiled, rich playboy from Mexico's richest family, refuses to pay her it just adds to her problems. She soon gets her revenge as Leo goes overboard and wakes up with no memory. She pretends they are married, gets him a job on a building site and essentially makes him do all the cooking and cleaning. That frees up her time to study and all goes well.

Somewhere in there is a plot that could actually be funny and sweet. Sadly you won't find it in Overboard (2018). From getting the kids to call him ‘Daddy', to the complete lack of chemistry between Faris and Derbez, everything in Overboard is just ridiculous. When it eventually gets to the end, and not soon enough, we are actually supposed to believe that a guy who has been hoodwinked in the extreme, can forgive and move on.

I get that it's a fluffy movie. A romcom that should have a few laughs along the way. Unfortunately it just doesn't have any. Swerve at all costs! 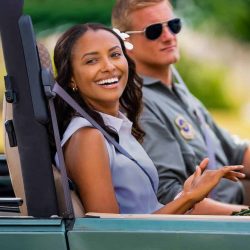