When a quiet and timid housewife discovers a passion for puzzles it takes her on an unexpected journey of self-discovery. Puzzle is a beautifully crafted indie movie that showcases Kelly MacDonald at her best.

A deceptively simple movie, Puzzle is about one woman's journey to experience more out of life. Set in provincial Connecticut, Agnes is a timid and dutiful wife and mother. Initially, you could be forgiven for thinking Puzzle is set in the 1950s, but it is set in the modern-day. It just so happens that Agnes isn't really a fan of modern tech, preferring to stay traditional.

On her birthday she receives a 1000 jigsaw puzzle which she assembles quite quickly. That leads her to the store in New York where it was bought. There she sees a small advert looking for a competitive puzzle partner. That, in turn, leads her to Robert (Irrfan Khan) and that's when Agnes decides to take a leap of faith and agree to partner up with him.

Now this doesn't seem particularly exciting and it isn't. That's pretty much the point of the movie. It's the manner in which Agnes goes about subtly changing her life, that is the crux of Puzzle. Tired of never really knowing anything about the world, spending all her time as a busy but unfilled house wife, beholden to the local church group, and making sure dinner is on the table at the right time every evening, has Agnes worn down. And she wants more.

Kelly MacDonald is superb as the understated Agnes. Mind-numbingly going about her daily jobs, she is almost invisible. But when she discovers her passion for puzzles she starts to live a life she didn't think she could have.

What makes Puzzle a solid drama is that it is almost devoid of drama. Anges' husband may not fully appreciate her but he truly does love her. Likewise, her children and family members who simply take her for granted. It reminded me of Alfre Woodward's Juanita, another story a self-discovery. Both are wonderfully written and crafted movies, though the ending to Puzzle was a little unsatisfying and open to interpretation.

Overall, Puzzle is a quiet understated indie movie that is all about the story. Sometimes the pieces fit together beautifully and in this movie they do. 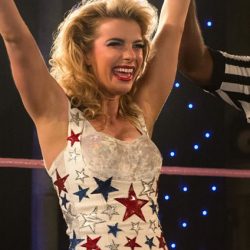