Forget the cute, sweet Christmas movies we are used to, Rare Exports: A Christmas Tale is a straight-up horror flick packed with suspense and black humour.

There are a lot of contradictions when it comes to the origin of merry old St. Nick, aka Santa Claus, aka Father Christmas. Does he live in the North Pole, Greenland, or Lapland? Is he a charming rosy-cheeked fellow bestowing seasonal good cheer or an omnipotent overseer whose listing of children into ‘naughty’ or ‘nice’ smacks of judge and jury? Most Christmas movies focus on the sleigh bells and goodwill. Rare Exports: A Christmas Tale swerves this entirely for Scandinavian darkness.

Released in 2010, Rare Exports: A Christmas Tale is a feature-length Finnish release that builds from earlier, popular, YouTube videos. Jalmari Helander, who wrote and directed both the videos and this movie, delivers a hefty dose of snow, night, and blood that draws heavily from Scandinavian folklore as well as the works of John Carpenter and Tim Burton. An excavation crew have been blasting explosives deep in the Finish mountains in an attempt to uncover a ritualistic burial ground. In doing so they accidentally awaken something ancient and evil that tribes long since gone fought to imprison.

Impending doom may be awakening on the mountain top of Korvatunturi, but at the mountain’s base there are a bare few families trying to scratch out a living. Pietari and his father Rauno herd reindeer, but something has been killing them and devouring their carcasses. Believing it to be the work of wolves, a trap is set in the snowy whiteout. But it captures something far more dangerous than wolves…

What Rare Exports gets so right is that whilst it is clearly parodying the saccharine Christmas / Santa story, it does so with no hint of nods or winks to the audience. Aside from the Christmas checklist (Santa, Elves, Reindeer, check, check, check, etc), Rare Exports is a straight-up horror film. Think less Klaus, more The Thing. Dark and moody camerawork accentuates the bleak and cut off nature of our setting. We are miles and miles away from help, and the darkness is coming. Yet there is also some knowing humour to be had in the patently ridiculous nature of the threat that the movie slowing unwraps.

Tonally, Rare Exports is fantastic. But it does struggle to fill the screen throughout. You can tell the idea is borne of YouTube shorts because whilst the movie starts strong and ends strong, the middle suffers from essentially flapping around like a loose end. Once we discover the inhumanly strong but mute old bearded man that may or may not be Santa (has Santa ever tried to bite off YOUR ear?!) then Helander indulges in an overlong segment where all our movie’s characters shuffle in to meet the threat. Suspense wise this is great for stoking the threat so that it can burn brighter later, but chunks of the movie’s midsection grind the action to a halt.

Dragging middle act aside, Rare Exports: A Christmas Tale is a superb and little appreciated ‘anti’ Christmas tale, similar to the Danish offering Elves. Black humour combined with a Grimm Brothers-esque fairytale angle is a winning combination and much like John Carpenter’s The Thing, Helander does a great job of setting up some character traits and then subjecting them to loneliness, paranoia, and fear. Considering the small budget, he gets plenty of mileage out of crisp and snowy suspense. Santa may be a coming to your town, but where did he come from first? 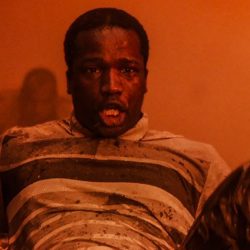