The Sequel to RED, RED 2 gets the gang back together as they are tasked with retrieving a lethal nuclear device. Proving that youth is no match for experience, the movie is packed with an all-star cast and is a slice of fun with a good combination of snark and explosions.

The first RED (Retired & Extremely Dangerous) was a surprise breakout hit for a gaggle of aging action heroes. Starring Bruce Willis, the set up allowed for plenty of grey-haired (or no-haired, in the case of Willis) fightbacks against young whippersnappers, where experience defeated youth each time.

This unsurprising sequel delivers more of the same, but creaky joints can be heard over the whizzbang. Our core cast consists of super agent Frank (Willis) and paranoid-schizoid Marvin (John Malkovich). There is also eager for action Sarah (Mary Louise-Parker) and cool as ice assassin Victoria (Helen Mirren).

They are tasked with retrieving a lethal nuclear device and rescuing the now mentally confused man who invented it (Anthony Hopkins). The gang battle against other hired killers, shady government forces, and Russian double (or is it triple?) agents.

Using the central conceit of having an older cast be underestimated by those around them continues, but with less freshness. The first movie had an increasingly exasperated Karl Urban getting his ass handed to him by Frank to hilarious effect. However, RED 2 suffers from a plot that consists of a grab bag of set pieces and much less ageist fun.

Like The Expendables, RED 2 seemingly delights in firing as many actors at you as possible – Catherine Zeta-Jones! Brian Cox! David Thewlis! Byung-hun Lee! AAAaaa! As our cast skips between locales every 20 minutes the result is a hodgepodge: crudely stitched together and liable to fall apart if picked at for too long.

Although the disjointed nature of the plot can be disconcerting there is still plenty of fun to be had moment by moment. Mirren continues to shine as a non-nonsense assassin and Malkovich’s swivel-eyed loon act is good for some great gags.

In fact, you will more than likely find yourself enjoying scene after scene. Though, if pressed, you will struggle to remember why our gang are where they are or for what reason. Oh, we’re in Russia now? Weren’t we somewhere sunny a moment ago? What happened to the wine enthusiast guy? Oh, that part’s over now then. Ok.

One reason for the plot confusion is, unlike the first movie, there is no clear antagonist. Is it the suspicious sex-bomb Major General Katja (Zeta-Jones). Is it the heavy-handed CIA type killer who is snuffing people out left and right? Maybe it's a shady arms dealer nicknamed ‘The Frog’ (Thewlis)? Or is it someone else entirely?

Sure it’s fun to have a twisty and turny plot, but when things take the inevitable swerve in the final act of the movie, RED 2 is guilty of effectively pulling a name out of the baddie hat and saying “it was this character all along!”

Director Dean Parisot brings out the comedic gems from his cast much like his excellent movie Galaxy Quest. He’s also lined up to direct Bill & Ted Face The Music so the talent is there. I just feel the script suffered from ‘overwritten syndrome’ this time around for our higher age bracket cast.

If given a choice of RED movies then just stick with the first one because everything good about the idea was done better there. But RED 2 is still a slice of fun with a good combination of snark and explosions so it’s worth a watch. 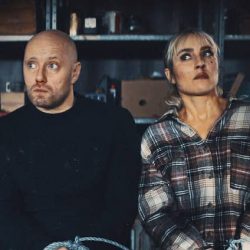