Rilakkuma and Kaoru is an animated show that follows a female office worker and her pet bear. But despite the quirky setup, it quickly falls into a very familiar format for those who watch Japanese slice of life shows. It is good but a missed opportunity to do something different.

Japan is well known for being totally obsessed with animation. It is, therefore, quite a surprise to pause and realise that, no, Japan doesn’t really do stop-motion. So when Rilakkuma and Kaoru – a show about a female office worker and her pet bear – popped up on Netflix, the sheer unusual nature was enough to make it stand out.

Rilakkuma is one of many mascot characters for the San-X company. San-X makes stationary but imbues their items with a whole host of cute characters, each with little back stories and personality traits. Rilakkuma is a brown bear that likes to laze around and eat a lot. The name itself is a portmanteau of the Japanese for relax (rirakkusu) and bear (kuma). In the background that San-X created, Rilakkuma turned up at the house of Kaoru one day and just decided to live there.

This Netflix show (made in association with San-X) focuses on Kaoru’s life. Both in her office job for a failing company, and with her home shared with two bears and a bird. The stop motion animation certainly gives everything a very tangible feel. The soft fur of the animals makes you want to reach out and stroke them!

Despite the quirky setup, these short episodes quickly fall into a very familiar format for those who watch Japanese slice of life shows. Kaoru’s friends have drifted away. She is single and coming to terms with the fact that this is life. It’s all the usual office work vignettes which clearly speak strongly to a largely office based Japanese workforce.

Other shows take this to extremes: like how Aggretsuko has waspish characterisation and the catharsis of death metal screams. Or how Kanto: The Sweet Tooth Salaryman mixes up office boredom with visually overblown food indulgence. Rilakkuma and Kaoru offers nothing to separate it from the crowd.

The stop motion animation style, whilst distinctive, has missed potential. There are very brief fantasy elements that stand out as an example of the flair the show could have explored. A snow ‘fever dream’ sequence is beautifully laid out and when the show takes a moment to bimble about underwater the creativity is there. The normality of everything else seems like a waste.

Missed opportunity aside, Rilakkumar and Kaoru is a show that may not have much individuality of its own but does what it sets out to do well enough. The cute factor is smile-worthy and an apartment populated by a fussy bird and two bothersome bears is like a warm hug of TV. And occasionally the show does surprise you. Like how it is rated ‘12’ because of one section where our gang cluster around a horror film (which leads to a rather irritated ghost turning up), or when aliens hover into their lives.

And if you don’t like the rare foray into the weird, well, there are episodes like the one where Kaoru racks up online shopping debt because she is attracted to the delivery guy! 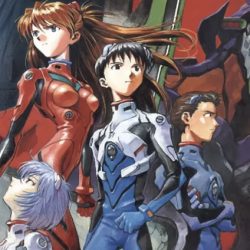