Rim Of The World showed some potential promise. Unfortunately, it delivered on absolutely none of it. A movie with almost no redeeming features, if it's a sci-fi action flick you're after, this definitely is not it. Swerve!

A cursory look through the production team of the team Rim Of The World shows some promise. Netflix’s teen sci-fi movie was written by Zack Stentz, who is credited with writing X-Men: First Class, Thor, and episodes of the underrated TV show, Fringe. Director McG generally trades in simple but fun fare like Charlie’s Angels and This Means War. All that coupled with a screenplay that angles for a Goonies slash Independence Day vibe should result in something decent, yes? Yes?

No. Chief among the many painfully poor elements of this film is the dialogue. This is truly awful dialogue. The humour never gets out the gutter but lacks any kind of self-awareness to sweeten the pill. Next, the reliance on racial stereotyping is too high, with several characters seemingly defined only by their ethnicity. Also, the plotting. And most of the acting. And the cinematography.

Ok, let me rewind. The film takes place at the Rim Of The World summer camp in California. Attending is: the constantly afraid Alex; a rich kid called Darius who would charitably be called ‘wisecracking’; Zhen Zhen, a Chinese girl determined to get to the camp at any cost; and later emerging from the woods is Gabriel, who is clearly lying about why he’s there at all. The gang are all barely acquainted before, wouldn’t you know it, aliens invade! Oh no!

An escape capsule from the International Space Station crashes in the camp. The dying scientist hands over a key that this gaggle of kids must convey to Pasadena, many many miles away. Unfortunately, they are pursued by an apparently unkillable alien that clung to the pod during its fiery descent through the atmosphere. And so our action shifts from painfully puerile dialogue to standard sci-fi action throughout, doing neither well.

Not a single thing that Darius says is worth the effort it would have taken to type it. His character is written to be the funny one with all the sophistication of someone to whom a long drawn out fart is the pinnacle of amusement. Zhen starts off strong but quickly ends up being a paper cut out with ‘girl’ written on it.

In a good movie of this type, the forcing together of different kids due to circumstance would develop due to bonding over a shared goal, or through forging a connection by working through conflict. Instead, we get endless bickering until a token scene in which a few simple truths are shared and then BAM, best friends forever.

No-one seems interested in making Rim Of The World. It merely goes through a checklist with little interest in adding anything new. Even the cinematography is oddly disengaged. Perhaps it was thought that constantly shifting from one extreme colour palette to another, as the movie progresses, would convey some sort of subconscious mood. In reality, I simply muttered ‘why’s everything blue now?’ with rising irritation.

One notable exception is that Jack Gore (also in Ideal Home), as the lead character Alex, is well played and imbued with an empathetic sensitivity. He portrays a boy fighting his own demons whilst growing into a strong morality. Gore’s performance is about the only thing that stopped me from switching off. 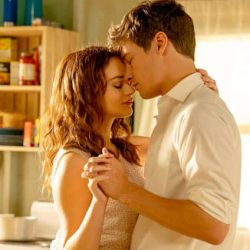