Run For The Money is an epic Japanese survival game of 'tag' where 29 celebrities must outrun the hunters to win the cash. But nothing is ever that simple...

We all know that Japanese tv is incredibly popular the world over. While it's easy to suggest that the likes of the Korean Squid Game had a helping hand in that trend, many of the shows that we watch today have already been huge successes, including Run for the Money.

With its latest instalment made exclusively for Netflix, Run for the Money has been a hit show in Japan since it first aired in 2004.

What Is Run for the Money About?

Run for the Money is a reality competition show with 29 celebrity contestants.

The idea is that they must run from and outmaneuver black-clad hunters who are hot in pursuit. The longer they stay on the run the more money they add to the cash prize pot.

And if they can escape and survive until the end, they win the money. The twist is that if they are caught or turn themselves in, the money they have earned up until that point returns to zero.

But it's not as simple as just not getting caught. There are twists and turns, possible moles hampering their escape and a LOT of hunters who want to catch them.

So which of the 29 celebrities will make it to the end? Tune in to find out.

Run for the Money Official Trailer

The bit new Japanese show was created for Netflix with a scheduled release date of November 15th 2022.

Is Run for the Money Worth Watching?

This version of the show has been scaled up massively for Netflix. Think of a huge empty town, hundreds of feared hunters, skydiving, a luxury yacht and you get an idea of what is in store.

The celebrity contestants are really entertaining, largely due to the mix of different personalities. They come from all different backgrounds and include young actors, popular comedians, professional athletes and pop stars.

All of them want to win the biggest cash prize but outrunning the very intimidating black clad hunters isn't their only problem.

Like the other hit Netflix show, The Mole, someone in their group is there to ruin their chances. So who is it?

Run for the Money is a chaotic and epic battle of survival, but it's also a lot of fun. It's amped up, exciting television and you can't help but want to keep watching to see who makes it until the end.

The biggest issue is that with so many participants and hunters, the show loses focus. You never really get to see any one person from the beginning until the end. Some come and go, and you didn't even realise they were playing.

Ironically, that's also what makes it a good show. It would be boring if they focused on just one or two players. And one thing it is not, is boring.

So if you want a light-hearted survival show on a more epic scale than The Floor Is Lava or The Zone, then check out this cool Japanese game.

This popular show packs in as many thrills as possible and has set the standard for survival game shows in Japan.

Is Run for the Money A Real Japanese Game?

Run for the Money is a real-life tag game show inspired by onigokko, the traditional Japanese game of tag.

Tag is a playground game involving two or more players chasing other players in an attempt to “tag” and mark them out of play.

While each country has its own version, usually all you have to do is touch another player, and say “Tag, you're ‘it'!”. Then that player is either out of the game, or they become the chaser, and you must run from them.

Run For The Money Netflix Contestants 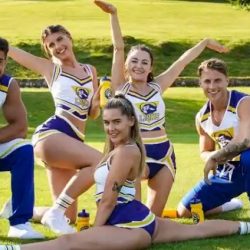