1950s repressed fascist Spain is no place to be for a young gay man. So when Gabino returns home and rumours start, the Falcon family is torn apart. Someone Has To Die if the family is to survive in this short but tense thriller.

Oh what tangled webs we weave when it's 1950s Spain and we can't come out of the closet. At least that's the tale of Gabino Falcon in the Netflix series, Someone Has To Die. Gabino is the only son of Mina and Gregorio in repressed fascist Spain. He has just returned after spending ten years in Mexico, having been raised by his mother's family. And everything would have been fine if he hadn't shown up with his Mexican dancer friend Lazaro. The instant implication is that Lazaro is gay, illegal in Spain, and by association, so is Gabino.

With the blinkers on, Gregorio and his matriarchal mother Amparo Falcon (Carmen Maura – In Family I Trust), set about arranging a marriage for Gabino and family friend Cayetana Aldama. When Gabino shows no interest, the bitter Cateyana starts spreading rumours about the two young men. The problem with this is Gregorio Falcon is the deputy director of the local prison where he regularly tortures young gay men into giving up their friends. The idea is that they will all get thrown in prison. So when people start to think his son is gay it becomes a choice between his reputation and job or his son.

While that is the general gist of Someone Has To Die, there are plenty of other subplots woven into the three episodes. Mina (Cecilia Suárez) is trapped and well and truly under the thumb of both her husband and mother-in-law. Gabino (Alejandro Speitzer) was sent to Mexico as a child for a reason which has to be uncovered. Amparo Falcon is hiding her own secrets and poor Lazaro is caught up in it all, simply thinking he was going to Spain on a holiday.

There is quite a lot to like about Someone Has To Die. It's tense and well-acted with solid characters and plenty of deception as the story reaches its climax. However, at just three episodes you never really get to know any of the characters. And I'm still not sure about the ending. Like a lot of thrillers, you never get to see the outcome of events. It would have been interesting to see the impact of what happened rather than just seeing the credits roll. An extra episode wouldn't have gone amiss. That said it is worth watching if only to see how awful life was in 1950s Spain unless you were rich of course. 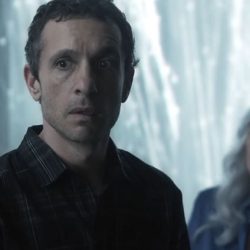