The show must go on and it certainly does in Staged. Watch as David Tennant and Michael Sheen, play more extreme versions of themselves as they attempt to rehearse a play via zoom. Hilarious!

‘The show must go on’ is a world-famous adage. The saying has transcended its theatre origins, such a mantra being essential in an art form where plenty can go wrong at any moment, and is uttered whenever the odds seems stacked against us and yet carry on we must. Out of the cloying creeping fear that COVID-19 has steeped us in for half a year and counting there have been shoots of defiance, where artists have used the lockdown restrictions to great effect (ao check out Bo Burnham: Inside). Enter stage right: Staged.

Starring David Tennant and Michael Sheen, Staged is a comedy series filmed almost exclusively on zoom calls (with some inserts filmed in the actors’ homes to fill in the gaps). Directed by (and also starring) Simon Evans, Staged sees the stars playing fictionalised versions of themselves as they try to rehearse a lockdown delayed performance of Luigi Pirandello’s play ‘Six Characters in Search of an Author’.

Such a premise lives and dies on the chemistry of its stars and it only takes a few minutes to see that Tennant and Sheen have this in spades. It probably helps that the two worked closely together in the recent superb adaptation of Good Omens (written by Neil Gaiman and Terry Pratchett) and by all accounts have remained friends since. Indeed, if you were to check out Tennant’s podcast interview with Sheen you’d hear plenty of the back and forth in Staged coming naturally in their real relationship.

As with other such ‘fictionalised versions of real people’ shows, there are some negative personality traits inserted to keep the comedy bouncy. Where in ‘The Trip’ Steve Coogan and Rob Brydon’s larger than life personas are frequently competitive over various dinners and lunches, Staged treads the (floor)boards by having Tennant suffer from neediness and insecurity, and Sheen succumbing to petulant bouts of childishness mixed in with good old luvvie egotism.

“I have never been second choice for any role!” booms Sheen, about to find out that, for this play at least, he is quite definitely incorrect. When Tennant, stung by Sheen labeling his voice “cartoony”, seeks assurance from a busy with actual problems Georgia, the insecurity is thankful more endearing than fatuous (something The Trip can be guilty of…along with ‘smug’).

Staged strikes the balance better by having more ‘characters’ to round things out in the form of Georgia Tennant, Anna Lundberg (Michael Sheen’s girlfriend), Lucy Eaton (Simon Evan’s sister), and a few surprisingly A-List guest stars. The nature of zoom calls is used for good comedic effect in a manner that many of us can relate to now: lag, dropped connections, and distractions from off-camera. While the premise is that Tennant and Sheen rehearse the play under Evan’s direction, things don’t go to plan.

Bickering begins to pepper the friendly banter and Evans, playing a woefully underprepared director with no backbone at all, struggles to corral his stars. Evans’ character is arguably the least satisfying to watch as his interactions lack the charm and chemistry of Tennant and Sheen, but his arguments with Eaton are tinged with sibling affection and by breaking up the ‘action’ they together stop the whole thing from threatening to be self-indulgent.

It is a truth not often acknowledged that in many sit-coms the best episodes are ones that take place within a ‘locked room’ scenario. If you will allow me to show my age; Bottom had ‘Hole’ (in which Ritchie and Eddie spend the whole episode stuck atop a Ferris Wheel); One Foot In The Grave had several (stuck in a car, stuck in the bedroom, Victor pottering around by himself for 30 minutes); and even Family Guy had a go (Brian & Stewie, where the pair are locked in a bank the whole time). Within such restrictions, the dialogue is forced to be the main star, and Staged is no exception.

There were several moments each episode that I laughed out loud which is a testament to the strong comic abilities of all concerned, be it ad-libbing or scripted dialogue. You would never have thought that wheedling discussions about name placement in the credits (then reflected in the credits of the episodes themselves) could mine so much mirth.

In typical British sit-com fashion, Staged even manages to throw in some pathos with Sheen’s constant references to an elderly neighbour. At first he is annoyed that she catches him using her recycling bin, but this turns to concern when she stops answering her door. During these strange-and-unprecedented-times (a phrase I am sure you have heard enough by now) to produce a show of this quality with the limited tools available is proof, if such were needed, that comedy flour can be baked in lockdown bread in any scenario. 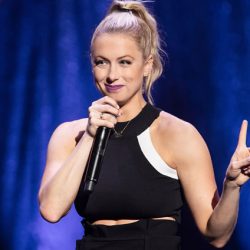