When Carlton Flynn goes missing, detective Michael Broome suspects a connection with a cold case from seventeen years earlier. But as the missing persons count keeps rising, Broome believes he has a serial killer on his hands in Stay Close, a Harlan Coben adaptation.

Harlan Coben has made quite the name for himself, not just in the literary world but also on Netflix. Every adaptation of his books instantly becomes a massive hit for the streaming service. And Stay Close is no different.

A limited series, the story and plot of Stay Close is played out over eight episodes. There are quite a few characters, all of whom seem to be hiding some dark secrets.

The story goes like this. On a random night out, a young man named Carlton Flynn goes missing after leaving Vipers Club, run by Lorraine Griggs (Sarah Parish). We see him enter the woods and then nothing.

We then flip to Ray Levine (Richard Armitage), stuck in a dead end job, this once promising documentary photographer now earns a living pretending to be paparazzi at celebrity obsessed rich kids parties.

It then turns out that Ray was also out and in the woods the same night as Carlton and once he checks his computer, spots him in one of his photographs. However, for some reason Ray won't go to the police, leaving the evidence inside a random police car instead.

Then we have Megan Pierce (Cush Jumbo), a seemingly normal working mother, engaged to be married to her long time partner Dave (Daniel Francis) and their three children.

But she is hiding a dark past and one she doesn't want to return to but with her increasingly odd behaviour, Megan's family begin to suspect that all is not what it seems.

Lastly, we have the police detectives now on the case of trying to find the missing Carlton Flynn. They are DS Michael Broome (James Nesbitt) and DC Erin Cartwright (Jo Joyner).

And the whole puzzle of Stay Close begins with the specific date Carlton Flynn went missing and the similarities with a missing person's cold case from seventeen years earlier when another man, Stewart Green, disappeared.

So what happened on that fateful night all that time ago? How are Megan and Lorraine connected to each other? Well, to tell you that would just be spoiling the fun. Suffice to say that the Netflix series Stay Close will have you glued to the tv.

Is Stay Close Worth Watching?

Yes it is. From beginning to end this tv series is packed with gripping suspense as the case turns deeply personal for all involved.

While figuring out what happened the night Carlton disappeared, secrets from the past are unravelled and come back to haunt some of the main players.

Comfortable lives get turned upside down as the number of missing persons start piling up. It also doesn't help that there are a couple of psychopaths, known as Barbie & Ken (Hyoie O'Grady), on the loose running their own investigation.

But like all good Harlan Coben mysteries, Stay Close does have a solid beginning, middle and end with all threads resolved as the full story is revealed.

What Is Stay Close About?

Based on the book of the same name by Harlan Coben, Stay Close is a crime drama that takes the main three characters on a journey to the past, to one specific night when all their lives changed.

Now seventeen years later they must all confront what happened as mainly Megan's past comes back to haunt her. Trying to conceal dark secrets, Megan finally must come clean about what happened before anybody else ends up missing or dead.

Plus there are a few murders to solve along the way!

Where Is Stay Close On Netflix Filmed?

Stay Close Netflix is a British mystery drama miniseries that began filming on 18 February 2021 and wrapped on 30 July 2021. It then hit Netflix on December 31st 2021.

Mostly filmed outside, the bulk of the production was done in Brinscall, Lancashire. Areas around central Manchester, St Helens, Runcorn, Ashton-under-Lyne, Blackpool, Formby, Morecambe and North West England were also used as locations.

The bridge that we see so often is Runcorn's Silver Jubilee Bridge. And the big huge statue that we kept seeing is Jaume Plensa‘s sculpture Dream. That is a piece of public art and is located in Sutton, St Helens, Merseyside.

The Cast Of Stay Close

Richard Armitage as Ray Levine, a photojournalist looking for his missing girlfriend.

Sarah Parish as Lorraine Griggs, a mysterious woman from Megan's past.

Eddie Izzard as Harry Sutton, a lawyer and a former associate of Megan’s.

Will There Be A Stay Close Season 2?

The answer to that is sadly no, there will not be a second season of Stay Close.

As the storyline is based on a book the whole story was wrapped up completely over the eight episodes.

That basically means it is done, but given that Harlan Coben has so many novels I'm sure another adaptation is already in the pipeline.

In total Coben has six adaptations on Netflix, including Stay Close, so if you haven't seen them all then you can check out Safe, The Stranger, The Woods, Gone For Good and The Innocent. 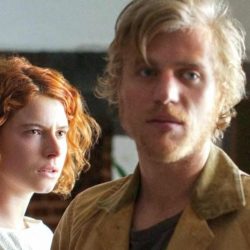 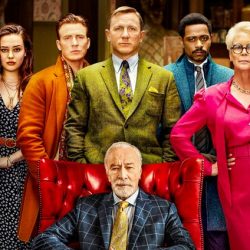