In Sweet Tooth, 'The Sick' has wiped out swathes of humanity and babies born are now hated hybrids as Gus, a boy who is half human and half deer, journey's in a post-apocalyptic world to find his mother.

Just when you thought you wouldn't want to watch another series where a global pandemic decimates humanity, Sweet Tooth takes you by the hand and gives you a protagonist like Gus to guide its story.

Sweet Tooth is a fantasy drama series developed by Jim Mickle for Netflix. It is based on the comic book of the same name by Jeff Lemire and is produced by Robert Downey Jr., Susan Downey, Amanda Burrell and Linda Moran.

What Is Sweet Tooth About?

Ever since the world went to hell due to ‘The Sick', Gus has been protected since he was a small baby by his ‘pubba', hidden away from the outside world in a fenced-off nature preserve.

Raised safe, taught how to read, and banned from going past the fence, we join Gus as he turns 9 years old and his safety is threatened. Threatened because Gus is a hybrid.

Hand in hand with The Sick wiping out large swathes of the world's population was an inexplicable act. Every child born at that time and since has been a hybrid: half human, half animal.

Gus (Christian Convery) is part deer with all the associated senses; being able to smell things from far away, having ears that get overwhelmed at loud sounds, and with two large antlers coming out of his head, of course.

With only a picture of his mother and a general direction of Colorado, Gus sets off to connect with the woman he has never met.

Sweet Tooth is a show that charms you quickly based on the strength of its performances. Part road movie, part society breakdown apocalypse, part heroes journey, Sweet Tooth shines through Convery's warm and vulnerable performance.

He exudes an infectious optimism of youth whilst puzzling through his sheltered upbringing, initially unaware of the extreme prejudice and hatred aimed at hybrids (as the surviving people generally blame them for the onset of The Sick).

But unlike the vast majority of hybrids who are mostly animalistic Gus can talk, and that buys him precious time.

The show jumps between a few plot lines and sprinkles in some flashbacks for added detail.

Mostly we follow Gus as he pairs up with the highly reluctant Tommy ‘Big Man' Jepperd (Nonso Anozie from Zoo and Artemis Fowl).

Jepperd, as a former member of the hybrid-hunting ‘Last Men' is superb throughout every episode and Anozie goes through a whole complicated journey laden with pride, regret, guilt, and survivalist as the big man's past catches up with him.

Jepperd and Gus later meet up with ‘Bear'; a human teenage girl fighting to protect hybrids (Stefania LaVie Owen), and the three make for a central family dynamic that will pull at your heartstrings.

Is Sweet Tooth Worth Watching?

Away from our main trio, there are plotlines such as the Singh family struggling to hide infection in a neighbourhood that turns into vigilante action very quickly indeed.

Dr Singh (Adeel Akhtar) is faced with difficult choices in his research for a cure to the deadly virus, further darkened when hybrid-hating General Abbott fights to kill or capture all he can find.

Akhtar plays a permanent state of worry across his face which, though realistic, can be exhausting to watch as his scenes click the narrative into place like a jigsaw.

Abbott (Neil Sandilands) beams hardliner villain through an iconic inscrutable look but is underused to the point where he falls into being a tool to wrap up plot threads, sadly.

Served slightly better is ‘The Preserve' where Aimee Eden (Dania Ramirez) finds her calling raising an abandoned pig hybrid baby as her own daughter.

This relationship lacks the dramatic heft of Gus and Jepperd, but adds another side of humanity to the show, needed because Sweet Tooth kind of picks up and puts down the ‘apocalypse' peg as appropriate.

Sometimes we are Walking Dead level of scavenging and fear of outsiders, and other times there is a suburb or a market going on. The scale of societal collapse is more suggested rather than seen.

That brings us to an irksome point: do we really need a narrator? It's possible the unseen voice of James Brolin will be a character in the second season. But at this point, it shunts the mood into storybook territory in the opening scenes of each episode, as if some ‘Once Upon A Time' is playing out.

Drop that please because – though it may sound counter-intuitive to say so in a show about a kid with deer antlers sticking out of his head – it interferes with the realism.

Gus and Jepperd's journey is as real as any other post-apocalyptic world story you care to name. It has the hallmarks of self-discovery, a potential fools errand, prejudice and people resorting to base fears, and the beauty of an Earth healing without humanity sucking all the life out of it.

Focusing on the niggles, of which there are several, is unfair to the overall success of the execution of Sweet Tooth.

Whilst no plot thread is ever as fulfilling as when we are with Gus, the show moves around its characters frequently so we are never left waiting for long.

Convery and Anozie steal the show, and their performances imbue you with a will for them to succeed.

Fate and disappointment may be stalking Gus as he edges closer to Colorado, but when the light hits his antlers from behind you are still dazzled by the purity of him standing there. Bring on season 2! 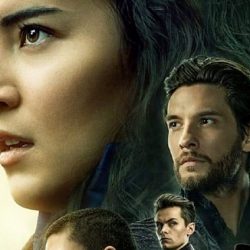 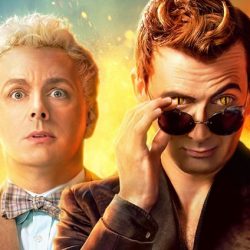