This brilliant sequel of the 90's cult classic was a long time coming and fans of the original will love this film. In fact, T2 delivers a grittier even tragic experience that stands on its own but be warned this movie is not for the faint-hearted.

T2 Trainspotting is the sequel to the amazing original film that burst onto the scene in 1996. It is set in Edinburgh and follows a group of hopeless heroin addicts growing up in the late 1980s. The original was awash with wild and outlandish characters with a soundtrack that made it an instant cult classic. It is firmly on the list as one of the biggest British films ever released.

Danny Boyle directed both films at a blistering pace. With excellent camera work he gets the most out of the harsh urban locations in which the stories are based. T2 Trainspotting nods its hat to the first movie, adding scenes from the characters younger days and some of the old songs from the first film. As a result is is perfectly weaved in with the new film.

Irvine Welsh dreamed up the characters that hold the story together. The characters, while complex, are easy to relate to. Names like Sick Boy, Begbie, Spud and Rent Boy say it all really. Each of the main stars have gone on to become some of the most recognisable faces in the film industry. Ewan McGregor stars as Rent Boy, Ewen Bremner as Spud, Jonny Lee Miller as Sick Boy and Robert Carlisle as Begbie. To say this film kicked off their careers would be an understatement.

T2 Trainspotting brings the group back together. Even Irvine Welsh makes another appearance as Mikey Forrester. But as you would expect they are all somewhat older and coming to terms with the desperation of mid-life. Each dealing with it in their own crazy way. Where the original film carried you along in youthful experience, T2 faces up to the harsh realities of getting old and letting the past go. Which in some ways makes it even harder to watch than the original.

All in all, both films are great but in very different ways. But that was always going to be the case because the books are very different too. Both are very confronting at times and grapple some very difficult questions about the harsher sides of life head-on. Danny Boyle has done a great job with T2 Trainspotting. He did not make it quite as twisted as the book and it is much better for that. This film manages to touch the soul in ways that the first never could. It is still a wild ride but manages to hit you with some real emotional sadness too. 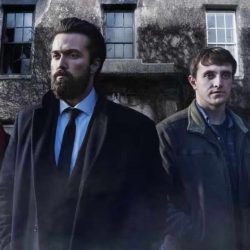