Three best friends make a pact to avoid relationships, which of course means they all promptly end up in relationships - but don't tell each other! That Awkward Moment is a funny, cleverly written romcom with great on-screen chemistry between the three leads.

A romcom with a difference, That Awkward Moment, is a really good laugh and a highly enjoyable film. Thankfully it veers away from the stereotypical beautiful, overworked, under-appreciated, unlucky in love female lead. Instead, it takes a different perspective, this time from the point of view of three single guy friends.

Jason (Zac Efron), Daniel (Miles Teller) and Mike (Michael B. Jordan) are best friends. Jason is the consummate ladies man with a number of girls rotating through his apartment doors. Daniel, while not as insensitive as Jason, has his fair share of hook-ups. And Mike has just found out that his wife is cheating on him, so is newly single.

Intent on enjoying life as much as possible, the guys come to an understanding that none of them will get into relationships. However, Jason soon meets Ellie and despite his reluctance to engage in anything deeper than a puddle with a girl, soon finds himself really liking her.

Daniel realises that while his friend Chelsea acts as a great wing-girl, he is actually falling for her. And Mike, unwilling to just let his marriage go, decides to try an reconcile with his wife.

The problem is that none of the guys tells each other because they don't want to break their ‘no relationships' pact. But of course, this can't last very long and the truth finally comes out. But at that stage, Jason has already tried to distance himself from Ellie and she no longer wants anything to do with him.

That Awkward Moment is a solid film with great characters. The banter between the three leads is magic with Michael B. Jordan acting as the perfect moral compass to the insensitivity of the other two. It is well balanced with great natural flowing dialogue and moves at a pace that keeps you engaged and entertained.

My only issue with That Awkward Moment was the overly cheesy ending. Think fondue levels of cheese steeped in cringe. It sort of went against the grain and feel of the movie that had gone before it. But if you like overly dramatic huge displays of romance in your romcoms then you'll love it. 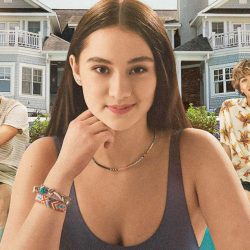