If you've already seen The Babysitter, then you will know exactly what's coming in The Babysitter: Killer Queen. Blood, lots of blood, gore and very creative killings in a movie only saved by a decent lead performance from Judah Lewis.

Some things have to be seen to be believed. Cole (Judah Lewis) has seen some things, but no one else believes him. Why would anyone believe a pre-teen boy babbling about murderous babysitters and blood cults?

Director, McG (Charlie’s Angels, Terminator Salvation, This Means War) carries so much belief in his bombastic style that it has to be seen, much like someone who insists on showing you their dislocating shoulder, whether you want them to or not.

The Babysitter, as described above, was one of those movies that got mixed reviews but throws so much gusto into the delivery that an audience was found and sequel ordered. So, two years later and with the stigma of being ‘the crazy kid’ still hanging over him, the now teenage Cole ditches school for some fun at a lake house with the pretty and alluring Melanie, plus some unwelcome hangers on.

Unsurprisingly (and as given away by the trailer) further blood cult shenanigans ensue, what with the original members (who were all killed in the first movie) somehow coming back to once again target Cole’s valuable claret.

The plot, as you might suspect, is pretty thin bones. The calcium lacking skeleton is but a frame on which to slap on a bulging meat balloon that can be burst and torn at any moment for big OTT gory deaths. The Babysitter: Killer Queen struts up to the genre buffet table and drops its trousers onto the ‘comedy horror’ vol-au-vents.

Yet this is the kind of comedy where people are either idiots or obnoxious and spend their time saying idiotic obnoxious things. The first 15 minutes are as much a test of your resolve as the proverbial hand in the meat grinder.

Despite never being particularly funny, The Babysitter: Killer Queen, like its predecessor, has gloriously dumb fun when it comes to killing off its cast. The blood cult are all cardboard cutouts painted with a brush so broad that the bucket of paint was really just thrown on in one go.

So murdering them all in a series of flesh ripping, bone-shattering, head exploding ways brings double the catharsis. You will wince, and you will groan. And this is what you are here for.

Yet the blood and guts wouldn’t be enough to save the movie if it wasn’t for some stand out performances. Lewis (also seen in The Christmas Chronicles) circumvents the hammy and larger than life displays of most of his fellow cast members.

In his expert hands, the character of Cole exudes genuine warmth and heart. Even with a script that throws some pretty low brow jokes his way, Lewis works his character into one you want desperately to survive. Similarly, Jenny Ortega, who plays attitude-laden transfer student, Phoebe, sparkles both with Lewis and with portraying her own emotional backstory.

The Babysitter: Killer Queen never asks much from you. McG knows full well what he is doing when he upends troughs of blood over the screen and slings the camera around like a pair of dude-bros smashing a beach volleyball into the dirt. The movie owes a vigorous stylistic nod to Sam Raimi. It isn’t original, but it is effective.

You are rarely lacking for much to look at; McG delights in not cutting away when body mangling death shreds up yet another victim. Once the lights go out and you are all tucked up, this babysitter provides exactly the service you have paid for. 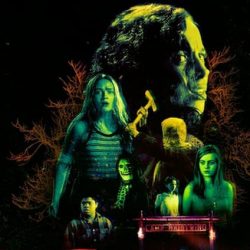