When two young orphan brothers are separated, they grow up into two very different worlds. After 28 years apart, they are finally back together and ready to save the World. This wild and mixed up super-spy spoof pushes the boundaries as far as the human mind could go.

The Brothers Grimsby is the creation of Sacha Baron Cohen and takes a distinctly different direction to his other creations like Borat. Here, Cohen chooses to move away from the singular character-based mockumentary style. Instead, opting on a story that has a firm focus on the bonds of family.

Nobby and Sebastian Butcher are two inseparable orphan brothers who love their home town Grimsby. But when a wealthy couple from London decides they can adopt only one of the brothers. The brothers are separated, growing up in two very different worlds. Sebastian rises to the very top of the secret service. Whilst Nobby embraces his working-class lifestyle, raising a large family and living mostly in the local pub. Nobby never forgot his younger brother Sebastian and when the chance to meet him arises, both their lives will take a drastic shift in direction.

It's fair to say, that all of the comedies created by Sacha Baron Cohen have heaps of shock factor. So, you should be aware that The Brothers Grimsby delivers some of the most cringe-worthy cinema ever. Generally, the fast-paced puns are pretty harmless. But, be prepared for the elephant scene, which I guarantee will shock even the most open of minds.

One thing that does work well with this film is the strong casting. There is a host of British comedians playing Nobby's boozed-up mates. Ian McShane plays the head of MI6 and Penelope Cruz picks up the role of the baddie. Even Daniel Ratcliffe makes an appearance, tragically contracting HIV, poor sod. But the real standouts come from Rebel Wilson and Mark Strong. Wilson is cast as Nobby's loving wife and does a great job with the grossed out script. Whilst, Mark Strong does an incredible job keeping a straight face cast as Sebastian the super slick secret agent.

It's clear that the underlying story is one of family, regardless of how crass Nobby is. His heart is very much in the right place. Yet, for me, this lower-class champion of being a scumbag conflicted somewhat with what Cohen seemed to be trying to achieve.

All in all, though, the Brothers Grimsby is a none stop rampant bag of laughs that is relentless in its delivery. There is a good mix of super-spy action and outrageous comedy moments. Let's be straight here if you are easily offended, then you are best bypassing this movie. But, if you are a fan of Sacha Baron Cohen the Brothers Grimsby is a must-watch. It's certainly different from his other comedies but still manages to shock you as only he can. 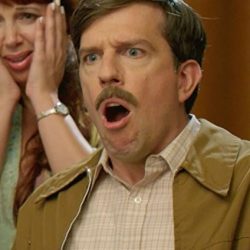