The Bubble from Judd Apatow is a brilliant comedy about a group of actors stuck in a hotel in a pandemic bubble while they make a movie sequel for a hugely popular dinosaur franchise.

If you just want to sit back and have a few laughs then there's no better director to bring on the lols quite like Judd Apatow.

From Knocked Up to Trainwreck to The King of Staten Island, this is a guy who knows how to make us forget our troubles for a few hours.

So just what has he got in store for us with The Bubble?

Judd Apatow’s Netflix comedy follows a group of actors and actresses stuck inside a pandemic bubble at a hotel attempting to complete the sixth installment to an action franchise film.

So it's really the making of a movie within a movie. And this particular one is about flying dinosaurs, called Cliff Beasts 6, which is supposed to be a wildly successful dinosaur-themed blockbuster franchise.

Basically, Judd Apatow and co-writer Pam Brady were inspired by the production of Jurassic World Dominion (2022), which was filmed during the pandemic with its actors living together in a hotel during the shoot.

So they made a comedy based on that exact same thing. Genius!

What you get is a whole lot of fun as the Cliff Beasts cast are thrown together in a posh hotel somewhere in England and made to live with each other for the production of the film.

But being the Hollywood elite, they soon grow weary of being cooped up together and decide to make a break for it, especially when quarantine after quarantine means filming goes on for months and months longer than anyone thought.

Is The Bubble Worth Watching?

The Bubble opens strongly. Instantly the tone of the movie is clear, the characters are laid out and the jokes and sideswipes begin. Plenty of laughs.

But somewhere along the line, it starts to lag. And then it starts to fall into ‘daft' territory. Apatow throws everything at it to justify its more than two-hour run.

That said, if you're up for a laugh and love a good Judd Apatow comedy then The Bubble will be right up your street.

It's a clever concept for a film, really really funny in parts and has an incredible cast.

But if you're not sure then check out The Bubble trailer above and see how good it is for yourself.

The Bubble is was released by Netflix on April 1, 2022 and is available to watch right now.

When you are sort of trying to create two films at once, the cast is you need is going to be huge. Especially when one of those movies is a blockbuster action franchise attempt.

So, as you can imagine, The Bubble is absolutely jam-packed with megastars including…

Maria Bakalova as Anika who works in the hotel

David Duchovny as Dustin Mulray, the lead of the franchise and ex-husband of Lauren Van Chance

Kate McKinnon as Paula, the head of the studio

Vir Das who works in the hotel

Ross Lee, the new head of security on set

Of course, there are way more than that with some special appearances by the likes of Benedict Cumberbatch, Maria Bamford and Rob Delaney. 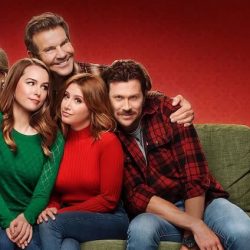