When Laura's brother suddenly becomes very ill she realises that he has been possessed by an evil force. Now she must embrace her true identity as a witch, changeover and break the spell. A quirky indie movie from New Zealand that is good but not great. Watchable but could have been better.

The Changeover is a quirky, supernatural indie movie from New Zealand. Set in Christchurch which is recovering from the effects of an earthquake, the film focuses on teenager Laura Chant. Her father has died and her mother is trying to keep the family together and so a huge amount of responsibility falls on Laura to take care of her little brother Jacko.

So far so normal. But Laura, played by Erana James, has a gift or an intuition that allows her to sense danger before it happens. So when she senses Jacko is in danger she does everything she can to protect him, much to the annoyance of her mother who simply thinks that Laura is just being overly dramatic.

But when Carmody Braque enters the picture and stamps Jacko's hand, everything changes. Braque, in the world of magic and witches, is a parasite. He feeds off his victims, sucking the life out of them which enables him to live for thousands of years. Played excellently by Timothy Spall, Braque is a creepy, insidious character and now Laura must find a way to break the spell before her brother dies.

Her only ally is a school mate called Sorensen Carlisle who, it turns out, is also a witch. Through his guidance, Laura (now a ‘Sensitive') must changeover into a witch and place her own stamp on Braque, releasing his hold over Jacko.

The Changeover is an interesting movie. The filming style is very minimalistic and devoid of gloss and glitz which gives it an air of believability. (Think the polar opposite of the slick production value in The Chilling Adventures of Sabrina). It starts off so normal that when the story evolves and the creepiness ramps up, it actually comes as a bit of a shock. But a good one that elevates the story and ramps up the pace.

The only real issue with the movie is that some characters are far more developed than others. Timothy Spall is incredible and really brings that understated ick that holds the film together. However, Sorensen Carlisle is as mysterious at the end as he is at the beginning. Laura is played well and convincingly if a little one-note. Sort of like a girl in a permanent state of shock and uncertainty.

The Changeover was clearly made on a tight budget so props for making it as engaging as it is. It's not a great film but it is good and different enough to be a worthwhile watch. 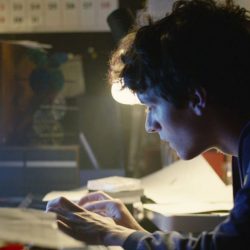