Forget Project Runway, The Fashion Fund is where the real designers are at. Headed by Vogue's Anna Wintour, the fund rewards one lucky recipient with $300K after beating out the competition in one of the toughest selection processes, all in a bid to find the next emerging design talent.

I'm no fashion expert, in fact I generally have no interest in the topic whatsoever though I confess I have been partial to a bit of Project Runway in the past. But I set about watching The Fashion Fund with an open mind, primarily because the reputation of Anna Wintour proceeds her and I was curious as to what she would be like in ‘real life'. And what a little treat it turned out to be. There is currently only one season available on Netflix and at 40 minutes per episode they whizzed by. How on earth the producers managed to condense such a lengthy process into such a short period of time without sacrificing any of the elements I will never know but it makes for a fast paced engaging show that will have you hooked from the get go.

So what exactly is The Fashion Fund? It's essentially a reality/documentary series that follows the process of selecting the next big fashion designer. It is a real fund called the CFDA/Vogue Fashion Fund and was established in 2003 to help emerging American design talent find continued success in the business of fashion. Simply even being qualified enough to enter is a task in itself as explained through interviews with Anna Wintour, Diane von Furstenberg and many more high profile names. You are required to have been in business at least two years, be profitable, be unique – basically be a fully functioning designer that maybe needs more recognition or help getting ahead. Amateurs need not apply!

From the initial applicants, the number is whittled down to 50 and then to 10 designers and from there the process ramps up over a four month period that includes a challenge, site visits, vogue photoshoots, interviews, fashion shows etc… Every single aspect of the designs and business acumen is poured over by the elite panel who ultimately vote in a secret ballot for the winner. That winner then receives a cheque for $300K and some serious mentorship to get their business well and truly on the map.

As something that wouldn't normally peak my interest, I really did like it. This is a very serious process with huge rewards for the winner but it's fair and unbiased with no drama and no contestant squabbling. The Fashion Fund is a pleasant surprise and I would love to see more seasons available.

Update: The Fashion Fund is no longer available on Netflix UK. If it begins streaming again, we will update the page. 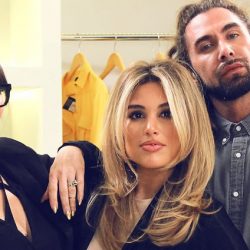