When a group of teens get trapped in an 80s slasher horror things go very wrong when the killer goes off-script in The Final Girls. Fun take on the slasher genre.

Go to the police! Don’t go out into the woods alone! Leave that dark scary corridor alone! DO NOT HAVE SEX! We’ve all shouted advice at the screen whilst watching horror movies, but how would we survive actually being in one? The Final Girls joins the canon of movies that play around with horror tropes by taking modern contemporary characters and trapping them in a typical 80s slasher flick.

Horror movie directors know full well about the tropes we all make fun of and post Scream there have been plenty of films to be coy in how they treat the audience. Where Cabin in the Woods took apart the mechanics of slasher movies with clinical precision, The Final Girls has more fun playing with the movie-making and writing elements (not least the concept of the lone surviving ‘chaste’ final girl).

Max (Taissa Farmiga) is struggling to cope with the death of her mother. This is doubly hard considering her mother was famous scream queen Amanda Cartwright (Malin Åkerman, The Sleepover), star and final girl of the beloved cult 80s slasher Camp Bloodbath movies. Reluctantly dragged to a film festival showing the movies by horror fan Duncan (Thomas Middleditch) and her friends, they are forced to flee as the theatre catches fire. Max cuts through the screen and pulls her friends to apparent safety, except that they wake up inside the film itself.

That our cast know they are in a movie means that The Final Girls gets to have great fun with the immutable logic of 80s horror movie staples: it isn’t just us pointing and laughing at the bad dialogue, our cast get to do so too. Alia Shawkat’s dry-witted Gertie will be familiar to anyone who enjoyed her as Maeby in Arrested Development, and Adam DeVine’s horndog in-movie character gets plenty of gags for being so obnoxiously repulsive. Similarly, knowing you are in a movie allows for manipulation of movie logic, such as deliberately triggering flashback effects at opportune times.

So far so schlocky, except that The Final Girls carves some real heart by virtue of the potentially redemptive mother and daughter central dynamic. Max’s mother exists within Camp Bloodbath as her character – doomed to death Nancy. There are many great scenes between Max and Nancy, as the grieving daughter tries to do right by this ambered version of her mother. Can she be saved? Should she just be allowed to follow the plot of the movie? Well, when the machete-wielding killer Billy Murphy goes off-script due to the interlopers then it’s clear that knowing the movie inside out won’t keep anyone safe.

The Final Girls even manages to do a decent job of giving some proper substance to fallen out friends, Max and Vicki (Nina Dobrev) given that this particular dynamic has a habit of being a bitchiness dump that does no character any favours. Whilst it’s hardly a major plot focus, the fact that the script takes the time to properly address their development and resolution is commendable.

In fact, the whole script screams of one that has had love and affection poured into it, ironing out the dafter elements with understated and graceful character work. And when you build such solid foundations then you have completely earned going super cinematic in your final act. The gorgeousness of the cataclysmic ‘final battle’ against Billy, complete with lighting arcs and rolling cacophonous skies, almost does the preceding 80 minutes a disservice by upstaging it so much. Seriously guys, when you can make shots that stunning then please let us have more throughout instead of saving it right to the end!

The Final Girls is a love letter to its genre populated with great characters, and embroidered with some disposable ones. It delights in getting good slices of moments out of its solid concept. I wanted it to push the ‘inside a movie’ tricks further but didn’t begrudge the focus on character work above shoving in more pleasing gimmicks. Thankfully, The Final Girls doesn’t need to stalk and slash its way through the long grass of genre hokum to get within touching distance of your heart. 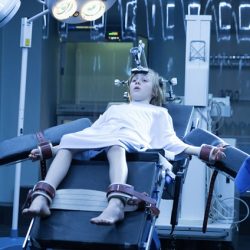