When the assassination of a minister of the Democratic Republic of Congo sends the country into chaos, the specialist team that carried out the mission find themselves as the targets, but who is it that wants them all dead and why? An intelligent action thriller with an equally impressive cast and Director.

The Gunman is the screen adaptation of the best selling novel, ‘The Prone Gunman‘ written by Jean-Patrick Manchette. it is a deeply intense thriller about an ex-special forces sniper turned Mercenary, Jim Terrier.

After carrying out a successful mission to assassinate the Mining Minister for The Democratic Republic of Congo, Jim finds himself tied up in an international web of deceit and corporate corruption. With most of the team involved in the assassination already dead and an endless line of people attempting to kill him, who can Jim Terrier trust, and can he stay alive long enough to find out?

Now, there are a few notable points that really draw you to this movie. One is the outstanding trailer, which let's be fair ticks every single box that you could hope for. Another key point is the director, Pierre Morel. He worked on many films with Luc Beeson and directed the first ‘Taken' movie. Here he has made a much more intelligent flick here and the expected intensity is replaced with a more blended approach with The Gunman.

The Gunman also has one of the best casting line ups that you will see anywhere. I mean, how many Oscar winners can you throw into one film? How is this for a list, Sean Penn, Javier Bardem, and Mark Rylance. Then add more award winners in Idris Elba, Ray Winstone, and Jasmine Trinca. I mean, come on, that is an impressive list for an action movie. This surely means, you have to watch The Gunman, right?

Well, in short, the answer is yes. But, it must be said that Sean Penn made The Gunman a bit of a personal project. For instance, he is listed as a co-producer, co-writer, and is cast in the lead role. So, guess what, The Gunman is pretty much all Sean Penn. In fact, it seems that the camera gives little time for anyone else. Plus, the script forces all of the other characters way beyond the fringes. Which ultimately results in a very different experience from what is expected from the fast-paced epic trailer.

That's not to say, that this impressive cast of The Gunman does a poor job, working in Penn's shadow. To be fair to him, Sean Penn is his usual brilliant self. He delivers the role with suitable intensity. But, it does become a little self-indulgent. Now, as a fan of Javier Bardem, who is just incredible in No Country for Old Men, it's hard to see why he took this role. His character is a pathetic, jealous, bitter man who has little or no redeeming points. But Bardem does well with what tit-bits he has. This goes the same for Idris Elba and Ray Winstone, who are both fantastic in the short time they have on screen.

However, Jasmine Trinca does get some space to shine and that she does. She is fantastic and is totally magnetic in her performance. Stealing the show is Mark Rylance again. This guy is outstanding. Even though the script goes against him, Rylance is the real stand out in The Gunman.

Now, at this point, it could be easy to assume that I didn't like this film at all. But, that is far from the truth. For me, The Gunman is a good solid action thriller that is well worth watching. In fact, it was a great surprise find because if I am honest, it had flown completely below my radar.

Overall, The Gunman is a great choice if you are looking for a different kind of action flick to the usual trash. Just don't expect to be watching the film that appears in the trailer. Or better still, bypass the trailer completely. 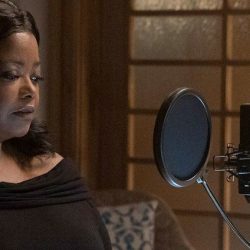