The History Of Swear Words, hosted by Nicholas Cage, does exactly what it says on the tin - looking at the origins of the most commonly used swear words. But it's all done with a good dose of fun and is a very easy watch.

Many things we say everyday have so many centuries of history behind the etymology that it can spin your head. Phrases that originate from cock fights (‘the pecking order’), phrases that originate from impoverished standards (‘crossing the threshold’), and phrases from when domestic violence would be allowed ‘within reason’ (‘the rule of thumb’). Yet what about some of the juiciest words to say? What about (*whisper it*), curse words?

The History of Swear Words is a six-episode docu-series on Netflix that digs into the history and connotations of many of the most commonly used swear words in the English language. Each episode is bookended by none other than Nicolas Cage, languidly positioned upon a leather seat within a set that evokes more Nat King Cole crooning that the dropping of F-bombs. An open roaring fire may be in the background, but Cage’s smartly dressed attire doesn’t reflect respectable discourse here.

Cage’s peculiar brand of unpredictable line delivery aside, the bulk of the episodes are made up of a combination of comedians waxing lyrical about swearing, and experts who provide background history and context to the first recorded usages of the words, and how their meanings (and offense levels) have changed over time. The latter parts are constantly interesting. We all know that ‘bitch’ refers to a female dog, but tracking the word as it mutates into a dismissive term to insult women deemed ‘assertive’, complete with quirky infographics, is entertaining and informative. The same goes for an argued ‘reclamation’ of the word by, as argued by the show, LGBTQ communities.

The weak link in the show is usually the celebrities, depending on your tastes. Notorious cursers Sarah Silverman and Nikki Glaser usually mix the vulgarity with an amusing point, but many of the other ‘bits’ feel like watered-down stand-up routines that fall flat in a soundbite context. For every deep timbred musing from Nick Offerman (The Founder), there will be a babbling bit that comes to a halt in some comedy cul-de-sac.

Your own tastes may vary, but for large chunks The History of Swear Words feels like YouTube videos that aren’t funny enough, or informative enough, to tick either box with enough deft satisfaction.
But Netflix is savvy and has clearly greenlit The History of Swear Words on the basis that gleefully volunteering expletives will get eyeballs, and the short run time means that show never feels enough of a commitment to quit.

Nic Cage is the secret weapon here as without him the series would indeed be too internet clickbait, but with his elaborately dressed and mysteriously alluring presence, Cage’s inexplicable magnetism means that volleying verbal insults edges into ‘fun’ rather than ‘coarse’. Worth a stream? If you are cruising for some late-night easy watching then yes, you bet your gosh darn sugar-coated plums it is. 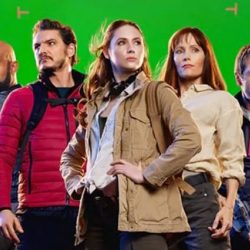