The In Between is a supernatural love story that follows Tessa who tries to connect with her boyfriend in the after world when he is killed in a car accident. It's the 2022 version of 'Ghost'.

If you're not old enough to remember the movie Ghost with Demi Moore, Patrick Swayze and Whoopi Goldberg, then the latest romantic drama to hit Netflix, The In Between, will be an entirely new experience for you.

Originally released in February 2022 on Paramount+, The In Between is the story of Tessa (Joey King) and Skylar (Kyle Allen) and their supernatural love story.

Tessa is a budding photographer and when she decides to go watch a French film at the cinema, she meets Skylar, a true romantic, who offers to translate it for her.

The two hit it off but go their separate ways. A chance encounter a few months later and the two are reunited and fall deeply in love. Then tragedy strikes.

A car accident kills Skylar, leaving a brokenhearted Tessa behind but unable to move on she discovers The In Between, the concept of a window of time in which someone recently deceased needs to have a final contact before moving on.

Along with her best friend Shannon (Celeste O'Connor), they try to contact Skylar by visiting all of the places where they shared their strongest memories.

And it works, sort of. Because while this is a love story, it is also a kind of ghost story so can there really be an epic ending for this teenage girl and her first true love?

Is The In Between Worth Watching?

If you love these kinds of movies and considering Joey King also starred in The Kissing Booth, then The In Between will be right up your street.

It has love, teenage angst, tragedy, hope and enough sad moments to have you reaching for the kleenex a lot.

The film opens with a David Foster Wallace quote: “every love story is a ghost story.” So that should tell you everything you need to know from the get-go.

The whole concept is that ‘love never dies' which is sort of ironic given the plot but that said, it passes the time and will definitely appeal to a certain demographic.

Cast Of The In Between

The In Between was directed by Arie Posin and is based on a screenplay by screenwriter Marc Klein.

Along with having the lead role, Joey King also produced the movie alongside Robbie Brenner and Andrew Deane.

Joey King as Tessa, a teenage girl who falls in love then loses her true love

Kyle Allen as Skylar, Tessa's boyfriend who is killed in a car accident

Donna Biscoe as Doris, the creator of The In Between concept

Where To Watch The In Between

If you live in the United States you can watch The In Between on Paramount+.

For anywhere else, you can watch the film on Netflix from April 8th 2022.

Will The In Between Movie Be On Netflix?

Yes, it will be on Netflix, it has a release date, outside of the US, of April 8th 2022. So if you want to watch an epic love story then you can stream it at home! 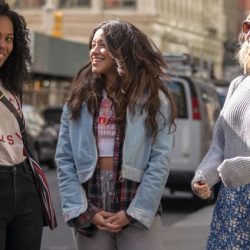