The Legend of Tarzan is based on the character created by Edgar Rice Burrows. The character first appeared in print way back in 1912 and there have been countless, books TV shows and movie adaptations of the story.

The original story is set around a young child who is raised by apes. He is the son and heir to the title of Earl Greystoke and his English name is John Clayton. This is one of the best known characters ever, so I won't bore you with the whole story.

It has to be said that some adaptations of the Tarzan story have wandered far from the original character. The film Greystoke probably is the closest you will find to the original. This version, however, does not waste time on telling you the same old story.

Instead, it bypasses the experiences of Tarzan as a boy and goes straight to John Clayton as Earl Greystoke. Back in England, he is living a sophisticated life. This is where the film works well. The viewer is not force-fed the same old story with new effects but gives you a fresh angle whilst staying true to Burroughs idea of the character.

Without spoiling the plot, Earl Greystoke goes back to the Congo in a diplomatic role by request of an American Envoy. But things turn bad very quickly. This is where the film truly gathers pace after a relatively sleepy start.

That said, the camera world is fantastic right from the opening scene. It provides a dark ambient feel in every frame. The cast is great and unexpected. The American Envoy who requests Earl Greystoke to go back to the Congo is played by Samuel L Jackson and he provides a solid performance with just enough of the Jackson cool to keep the film flowing along.

Alexander Skarsgard does a great job playing Tarzan, providing a believable twist to the deep duality of this character. Margot Robbie (Birds of Prey) plays Jane Porter, Tarzans American wife who he is totally dedicated to.

But the stand out performance comes from Christoph Waltz who is the Envoy of the Kingdom of Belgium who rules the Congo Free State. He is nothing short of outstanding playing the baddie and it has to be said that without his strong performance it would not be the movie that it is.

All in all this film was never going to be winning any Oscars. It does get a bit bogged down in its colonial narrative and takes some time to get going. But once it does it is a perfectly watchable film.

There is heaps of action, the camera work is fantastic and it is all bound together by some brilliant performances. Critics slated this film but I think it is unfair to cast it aside if you are looking for a good action movie to watch, give it a go. 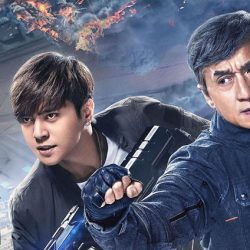