Haven't already seen enough epic shark movies? Then check out The Meg, the all-action blockbuster starring Jason Statham. It's like Jaws on steroids.

Would you like a movie about a shark? The film industry may have you covered. In fact, having a shark has pretty much become the byword for B-Movie. Sharks in tornados; sharks in sand; Frankenstein sharks; devil sharks requiring exorcism; super-intelligent sharks that mutate anti-dementia medicines; a mega shark that fights a ‘kolossus’; a house shark; a three-headed shark; robot shark: I have not made a single one of these up. But…and hear me out here…but what if the unique selling point was *drum roll* a reeeaaallllllly big shark. Like, MASSIVE?

Thus is the premise of The Meg (short for megalodon – a humongous pre-historic shark larger than even whales). A shark so big that it makes all other sharks look like minnows. It had lurked trapped beneath a supercooled cloud of gasses that hide an even deeper part of the Mariana Trench (the deepest point on Earth) but an expedition to explore this uncharted place accidentally set it free.

It sounds like the blurb on the back of a bargain bin DVD, but unusually this is a big-budget affair. The cast is headed up by ‘ard as walnuts perma-scowl Jason Statham, and evidence of the significant Chinese funding comes with major supporting roles for Chinese cast members such as sassy intelligent love interest (Li Bingbing), and doting stoic scientist father (Winston Chao).

With any monster movie, there needs to be a decent amount of characters to get munched and so the cast is rounded out by a generally fun collection of walking chum. Everyone concerned lives in a deep-sea research centre which promises future shark action goodness thanks to a massive glass ring for ocean views. Or at least you would think so. With a humongous shark and potentially claustrophobic setting there was a great opportunity to use the oppressive nature of underwater seclusion which is oddly passed up.

Notwithstanding that missed opportunity, The Meg hits that sweet spot that a lot of money and tons of re-writes gets you. The dialogue divides up between standard macho posturing, the right percentage of fun banter, and enough of a connection so that when they do start to fall foul of a gigantic swimming teeth attack you do care. Such set pieces are thrilling if somewhat scattergun, like the movie isn’t quite sure what to do with its titular fishy star.

The promise of being trapped in an underwater base is passed over in favour of a series of vehicle action scenes involving chasing the meg with boats or helicopters. It’s popcorn stuff that doesn’t hit high tension but manages to be good fun, especially when a ‘shatterproof shark cage’ is deployed. “Haha!” you think to yourself. “I bet it ISN’T shatterproof!” When a beach packed with holidaying revellers comes into the megalodon’s range the Jaws parallels are clear.

Director Jon Turteltaub makes sure there are mini character scenes with enough shots to identify particular people so that we don’t just treat a beach as a faceless mass of people. As this is a blockbuster movie the actual threat of carnage is low, so having a few people introduced to care about really helps.

Jason Statham’s particular brand of manly appeal is a good choice for the lead, and his Olympic swimmer background can’t have hurt his dive techniques. Much like Dwayne ‘The Rock’ Johnson he has a somewhat indefinable charm that allows licence for gruffness mixed with eyebrow raising quips. His rather generic character journey is played well, so that when he pauses for breath before zooming down in a reckless rescue there is a nice gravitas to the moment.

A less strong lead may have been the undoing of the movie in the places where the glue is a little weak. But with Statham, a fun supporting cast, a selection of good (if disjointed) action scenes, and plenty of chompy shark action, The Meg is a good choice for a night of expert-swimmer dead-eyed killing-machine fun. And the shark too, of course. 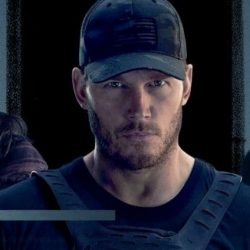