Payton Hobart wants to be President of the United States. But first, he must navigate the treacherous waters of high school politics to become Student Body President. The Politician is a clever, witty and fresh creation from Ryan Murphy that combines drama and dark humour perfectly.

The decisions you make when you are blinded by ambition have consequences. So Payton Hobart discovers in Ryan Murphy's latest creation, The Politician. Payton, son of a billionaire, is a senior in high school. His singular focus in life is to become President of the United States and to get there he must first become student body president.

But nothing is straightforward in the treacherous waters of high school politics. And certainly not when your opponent, who also happens to be your friend/lover, kills himself only to be replaced in the race by his vengeful girlfriend Astrid. And that's only the beginning of what is a mutli-layered story about how far people are willing to go to get what they want.

Murphy has created a superb show that touches on so many aspects of life that it's difficult to know where to start. So here are the basics. Payton (Ben Platt) is adopted and while his mother (Gwyneth Paltrow) adores him, his father does not. In fact, he doesn't even like him. Nor do his two idiot, entitled twin brothers. Having researched every modern day president, Payton knows he has to go to Harvard. But rather than buy his way in, for fear it will be used against him later on in his political career, he wants in on his own merits. Hence the reason he needs to become student body president.

With his calculating political team by his side, nothing is left to chance, including his choice of running mate. Despite concerns, he opts for Infinity Jackson (Zoey Deutch), a fellow student who is living with cancer. With his numbers up in the polls, everything is going as it should be until he discovers that Infinity is faking it.

And that's where Payton's problems begin. As the manipulation and lies escalate, Payton becomes a man on the edge. Throw in problems at home, the grief over losing his friend, the fake break-up with his girlfriend designed to elicit sympathy from the voters and an opponent willing to destroy him to beat him and you have the makings of an epic show in The Politician.

Ben Platt is astoundingly good. From beginning to end this guy doesn't miss a beat. A complicated and nuanced character, Payton, by his own admission, is not a good guy. But he does good things. And that's just one of a myriad of moral dilemmas that Murphy poses throughout the eight episodes of this dark comedy/drama.

All of the supporting cast is impeccable. And that includes everybody from Paltrow to Jessica Lange and even the late introduction of Bette Midler. The writing is sharp, witty and insightful with real depth. Every episode leaves you wanting more of what is a truly refreshing show. Bring on the awards and Season 2 please! 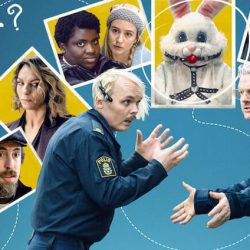