Movie legends Sean Penn and Mel Gibson deliver a masterclass in 'The Professor and the Madman'. The film reveals the scholarly struggle to compile the first Oxford English Dictionary. On paper, the story sounds less appealing than reading an actual dictionary! Nevertheless, the outstanding performances elevate this potentially dull movie into a compelling story about friendship, redemption and the magic of words.

Based on real-life events, Mel Gibson plays Professor James Murray, a self-taught academic recruited by the Oxford University Press to create the first edition of their now-famous Dictionary. All previous attempts at producing a comprehensive lexicon of the English language floundered under the weight of the challenge.

Prof. Murray and his team begin the enormous task of organising every word in the English language, including each terms origins and a concise definition. The size of the endeavour quickly overwhelms them, and the Professor's reputation is hanging by a thread when salvation arrives from an unlikely source, a mental patient at Broadmoor Lunatic Asylum.

Sean Penn plays Dr William Minor, a Union Army Surgeon fleeing the carnage of the American Civil War. The Doctor finds himself in Victorian London, where he struggles with PTSD and paranoia. In the midst of a delusion, he kills an innocent man and is committed to the infamous Lunatic Asylum. From his cell, the Doctor begins to assist Prof. Murray in solving the complexities of the English language and attempts to find redemption through words and friendship.

The film's story is based on the best selling book ‘The Surgeon of Crowthorne' by Simon Winchester. Mel Gibson purchased the rights to the book back in 1999; I doubt he envisioned it would take almost 17 years to bring this incredible story to the big screen.

Unfortunately on release, the film was panned by critics and audiences mostly stayed away. Post-production disputes between Gibson and Voltage Pictures meant the Hollywood legend refused to promote the movie. Ultimately it recouped just $7 million of its $25 million budget.

Commercially, ‘The Professor and the Madman' will go down as a flop – cinematically, this movie is far better than ticket sales suggest. The whole cast is superb, including Natalie Dormer and Eddie Marsan (Jonathan Strange and Mr Norrell). Victorian London is depicted in gritty realism, yet still looks strangely appealing.

Overall, it's fair to say this film won't appeal to everyone. Still, those who appreciate a well-made story with sharp dialogue will enjoy this movie and the performances of the cast. Who knew a dictionary could be this enthralling (adjective, capturing and holding one's attention; fascinating). 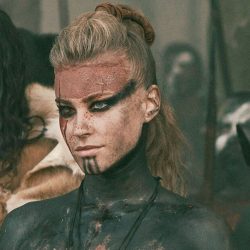