What should have been great given its concept, The School Nurse Files is instead a really dull Korean show that lacks focus and pace. So many better shows than that out there so try Strong Girl Bong-Soon instead.

School nurses are there for all your educational health-based woes. Creams for that rash. Plasters for this cut. Cold compress for that bruise. But what about other issues? When emotional problems spill out into ethereal consequences then you will need a health care worker who ain’t afraid of no ghost. Korean show The School Nurse Files takes the concept of a spiritual warrior defender, but can it put a band-aid over gaping wounds?

Sadly, no. If there was ever evidence that a well-crafted trailer can hide all ills, then look no further. The School Nurse Files is somehow both short and slow. Both high concept and wasted concept. The show certainly starts on a strong point. As a child Ahn Eun-young (Jung Yu-mi) learned that she can see ‘jellies’. All people excrete and exude a jelly-like substance that manifests their dreams, desires, and fears. Some even inadvertently create jelly versions of themselves that linger on after death before eventually dissolving: something that happens to genuinely shocking effect in the opening moments.

As an adult, Ahn Eun-young takes a position as a school nurse at a high school that seems to be saturated with jellies, especially in the forbidden basement. Armed with a toy glow sword and plastic BB gun Eun-young works to destroy the jellies before they become dangerous, but when she meets fellow teacher Hong In-pyo (Nam Joo-hyuk) who is surrounded by a protective jelly aura that only she can see (and which rejuvenates her on contact), Eun-young suspects the school is hiding dark secrets.

Despite such an intriguing set up which promises to be part Buffy the Vampire Slayer, part exploration of Korean folklore, The School Nurse Files quickly squanders any accumulated good will. Yu-mi plays Eun-young in a curious half way state that avoids both stoicism or the heavy weight of her burden and instead lands on a daily grind attitude that lacks any drama.

Events peak quickly in episode 2 with a vastly overblown sequence in which negative energy overwhelms the students and drives them to the roof to try and fling themselves off in droves. Yet this high energy crisis is drawn out so long and also so unmatched throughout the rest of the show that it feels like it has been lifted from the finale and crammed in at the start to get some blood pumping, leaving the remaining episodes limp and lifeless.

There are other elements that slowly ooze in, to little effect. Mystery shrouds the founding of the school on cursed ground by In-pyo’s grandfather, and that the only cleaning company ever historically allowed in the otherwise banned basement has stopped answering calls. Two rebellious students are displaying intertwined jelly auras which apparently is bad, but this never comes to anything. A slow understated romance between Eun-young and In-pyo is so slow and understated that it barely gets a toe in at all.

It’s telling that there is no emotional connection until the sudden appearance of ‘jelly eating’ Baek Hye-min (Song Hee-jun). Hundreds of years old, Hye-min comes into existence when ‘bad luck’ jellies are in abundance as only her stomach acid can destroy them. Her somewhat cursed existence (she can’t venture further than a small radius around the school, and will disappear once her task is done) drives Eun-young to try to give her a normal life. When a show introduces an apparent antagonist (why is that other secretive teacher so interested in In-pyo and does the acupuncturist know more that she is letting on?) only to ditch them for the guaranteed sympathy for a high school child who wants a better life, you know that something is very wrong.

No amount of surface level fun from seeing spirits destroyed by a plastic sword can rescue The School Nurse Files from such a languid and muddy approach to narrative. The characters all wheel about disconnected from one another. There is no central focus that holds attention. There is very little humour, or drama, or reason for anything. If you want a dose of Korean weird try Oh My Ghost! or Strong Girl Bong-Soon or Sweet Home. The School Nurse Files will just bland you into a coma. 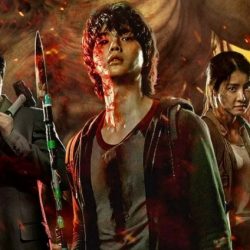