The Secret Of Crickley Hall is a supernatural drama about the past and present goings-on in the creepy Crickley Hall, the new home of the Caleigh family who's son has gone missing. Utterly compelling and edge-of the seat stuff. Perfect for fans of The Haunting Of Hill House.

There’s nothing like an old house and a long-forgotten horrific crime. It’s the stuff that ghost stories are made for, and The Secret Of Crickley Hall has both. Adapted from the novel of the same name by James Herbert, the eponymous hall plays host to the Caleigh family who have moved away from the city. Father, Gabe, has relocated them all in an attempt to distract them (and particularly wife Eve) from the impending anniversary of the disappearance of 5-year-old son, Cam.

The horror of a missing child is one guaranteed to wrench at the heart of any viewer. His attempt to get away from the trauma is lost when ghosts from Crickley Hall’s own troubled past appear. In doing so, the low-level psychic connection that Eve and Cam shared comes to life again; she senses his voice say, “Mummy, I’m not dead”. So our present-day storyline consists of an increasingly distraught Eve, ignoring threat both implied and real against her surviving family in an effort to stay and find her missing child. Although it is worth noting that she called her youngest daughter ‘Cally’ (so, Cally Caleigh then?!) so perhaps her judgment was always flawed regardless!

Intercut with this is a series of flashbacks from 1943 in which we learn that the hall was used as an orphanage and shelter for children fleeing the effects of the war in London. Run by the Cribbens, sister Magda and brother Augustus impose their will on the children by her hard-lined neglect (“food is a privilege, not a right”) and his vicious use of a cane to beat transgressors. None is beaten so ruthlessly as Stefan, mostly for the crimes of being both German and Jewish. But this arrangement is shaken up when young new teacher Nancy strives to protect the children more than obey the rules.

The two storylines blend together very well. Whilst we have the trappings of a ghost story and the typical issue of the plot needing to contrive reasons to keep its cast from simply leaving, the paranormal elements are used sparingly and with great effect. Attacks from a long-dead Augustus whipping present-day children is played not for spooks, but as an effective way of showing that his iron will and descent into madness continued into the next plane. We know from the present day that virtually everyone, children and adults alike, were found dead after a huge flood. But the hillside nature of the house is at odds with this story, and so there is plenty of suspense watching it play out in the past.

All the cast shine out. Teenager Loren (Maisie Williams) fills in the gaps between her disintegrating parents with emotive maturity and vulnerability. The interplay between Suranne Jones (Doctor Foster) and Tom Ellis (Lucifer) has subtle undercurrents. Eve’s dozing off for a moment is how Cam disappeared, and although Gabe has never blamed her for it the unspoken hangs heavy over them both. Externally, excellent gravitas is delivered courtesy of the ever-reliable David Warner (the house’s gamekeeper back in the 40s) and Donald Sumpter (a parapsychologist drafted in to explain away the ghosts).

Stylistically, The Secret of Crickley Hall makes all the right choices. When wanting to unnerve the audience it favours subtlety over scene-chewing terror, but in the dramatic moments, it also allows strength of character to shine through. Under the hidden abusive rule of the Cribbens, Nancy (Olivia Cooke) stands up at personal cost, whereas older child Maurice (Bill Milner) has learned that total, if reluctant, subservience reaps rewards. And through this, all the quiet rage of Augustus is masterfully delivered by Douglas Henshall. A need for utter peace and quiet is clearly at odds with running a shelter for children, yet the audible whips as Augustus swings his cane and stalks Stefan through Crickley Hall summarises the only language he can convey.

The Secret Of Crickley Hall is a great two-hander of a drama that unfortunately has to succumb to some tropes of logic in order to keep things chugging along, but by virtue of a talented cast and understated direction, it manages to be both utterly compelling and edge of seat tense come the finale. 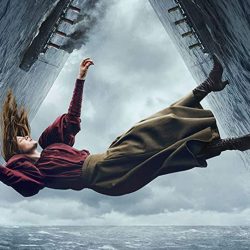