The Spy starring Sacha Baron Cohen is a tense drama based on the true story of Israeli secret agent Eli Cohen. During the early 1960s, Eli Cohen infiltrated the highest echelons of the Syrian Military and provided vital information which helped Israeli win a stunning victory in the Six-Day War.

Spy movies tend to fall into one of two categories — the ‘James Bond' action-packed thrill a minute style or the slower, narrative-based tales like Tinker, Tailor, Soldier, Spy and Smiley's People. The Spy from Netflix falls somewhere in-between. If you're looking for a high octane spy drama you'll be disappointed. Nevertheless, fans of series like Homeland and The Americans will appreciate the pacing of the show.

It's important to recognise this story is based on real events. Had it been a work of fiction, I suspect most viewers would consider it far-fetched. How could the Israeli secret service place an agent into one of the most paranoid dictatorships in the Middle-East? Early episodes detail how Mossad (Israeli Secret Service) recruited Eli and turned him into one of the most effective Spies in modern history.

The six-part show was written and directed by Gideon Raff. The man behind the TV series Prisoners Of War which later become the basis for the hit American TV show Homeland. Raff has clearly carved himself a niche in the genre. His recent Netflix Original Film The Red Sea Diving Resort is another real-life Israeli spy drama which received favourable audience feedback.

The director has a talent for bringing out the human stories behind these tales of intrigue. The emotional cost to Eli Cohen's transformation into a spy and the impact on his relationships is skillfully told. In one scene, Eli is handed a doll while undercover. The doll is a coded message from his handlers; it signals his wife has given birth to their first child.

The series is well made and captures the period perfectly. The supporting cast is terrific. However, it's the unlikely figure of Sacha Baron Cohen (The Brothers Grimsby) who plays Eli that surprises the most. The man better known to the world as ‘Borat' and ‘Ali G' gives a superb performance as the ‘The Spy'. Although, during the first episode, I couldn't shake the feeling that Sacha would look into the camera and say ‘Spying – great success!'

Overall, if you like series such as Homeland and Fauda, you'll enjoy this. Although, The Spy never reaches the heights of those shows. Notwithstanding, Cohen's impressive performance and the incredible nature of this true story make it well worth your time. 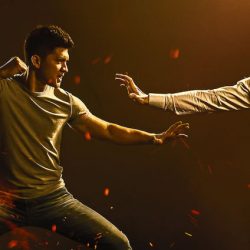