Feeling nostalgic? The Toys The Made Us will take you straight back to your childhood with incredible stories behind your favourite toys including Transformers, Hello Kitty, Lego and more in this fun documentary.

A cherished childhood toy is something that stays with you long past your junior years. The Toys That Made Us is a documentary series that glories in revisiting the iconic toy or franchise lines from yesteryear and filling in all the production details that your small play-addled mind would never have thought to ask.

Each series covers 4 major lines, with season two digging into the chequered history of Star Trek toys, the pan-cultural sensation that was (and arguably still is) Transformers, a history of LEGO from small wooden toy company to plastic brick megalith, and Hello Kitty in all its universal branding dominance.

Even if you are pre-sold on finding out more about your favourite toys, the presentation of the series from creator Brian Volk-Weiss can be a little grating. It goes for an over-the-top fun approach with plenty of slam cut editing to highlight the comedic script. It’s less Our Planet, more your average excitable YouTube host. However, skipping the rather irritating theme song and indulging in nostalgia can overwrite the somewhat nerve grating delivery.

By and large, the episodes mix the talking heads between industry insiders and super fans. The quality of this balance varies from episode to episode. ‘Star Trek’ takes amusement at warping into the often dubious quality of licensed merchandise. But the obsessive nature of superfans means that they blend well with actual industry contract info from toy company bosses like Mego. Conversely, the Transformers interviews are wonderfully passionate and informed when it comes to the creatives involves. But the fans add little beyond wallpapering the screen with their memories.

In terms of illuminating the history behind toy lines, The Toys That Made Us is a delight. The joy on the face of Hideaki Yoke (chief designer at Takara Tomy) as he relives his masterful transforming robot designs is infectious. Especially as he helps to explain the very weird history behind how the series was created. He took totally unrelated Japanese toy lines and merged them behind a Marvel Comics narrative to create the famous Autobots and Decepticons. And when the show deconstructs how LEGO rose from humble origins, only to plummet before being resurrected, I was kept rapt throughout.

All in all The Toys That Made Us overcomes an irritating ‘wacky high energy’ delivery (depending on your tastes) to reveal tons of fun facts and fandom behind beloved toy lines and that warmth of shared love seeps through every moment. And if you like that show you'll also love High Score. 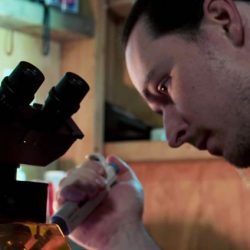