The Dillon family need cash. Hatching a plan, they rob a bank. But with less money in it than hoped, they find themselves checking in the old disused safe in the basement. The catch is that it's haunted. This is a a genre mash-up that tries to blend a heist with horror. It's effective but could be better.

Bank-robberies-gone-wrong movies usually take the turn of infighting, police intervention, or unplanned variables. Employee at the wrong place at the wrong time? Retired cop customer who fights back? Double crossing? You know the score. The Vault is an intriguing twist. Because what pulls the shutters down on this robbery, by a bunch of desperate infighting criminals, is this: a haunted vault.

The Dillon family need cash. Good hearted brother, Michael (Scott Haze), owes money to bad people. So live-wire sister Vee (Taryn Manning) and cold calculating sister Leah, (together with some hired muscle) execute a well thought out plan to rob a bank. The sisters pose as an angry customer and a job applicant respectively. This causes a diversion whilst the rest of the crew come in disguised as a fire crew.

But once the robbery is underway there is much less cash available than thought or needed. The bickering turns violent and it looks like the robbery is going to end in a bloodbath. Then, concerned deputy manager Ed (James Franco), says that far more cash is stored in the old disused safe in the basement. Except the staff never go down there due to……rumours.

The movie is paced well. The executed plan takes up enough of the opening to also give an opportunity to establish the criminal characters. Leah (Francesca Eastwood, Awake) is cool cucumber personified. But she struggles to maintain order when things go initially wrong. And when Vee slips on the knuckle duster to pound a hapless customer early on it’s clear that these two are going to clash, even without the impending paranormal.

Once the basement level is opened up all sorts of ghostly happenings begin. A phone call goes out to the police that couldn’t have been made by anyone in the bank. The hostages with bags on their heads seem to change in number. And the security footage of the safe cracker having a freakout at apparently nothing doesn’t tally with the looming figures that he can see. The second Act of the movie nicely ramps up the tension. More and more apparitions scare the criminal gang. And some seem to turn to self harm; unable to control their own hands.

However, come last 30 minutes it has become clear that The Vault peaks too soon. Michael spends a telling scene early on talking to a hostage where it becomes clear that he doesn’t want anyone to get hurt. Pegged as the nice guy, Haze’s acting varies from wide-eyed bland to genuinely hurt. But yet when he witnesses a fellow robber shove an active drill into their own head there is barely a reaction. The spooks are good, building tension throughout. But there is no rhyme or reason to them once the jump factor is out there. A mysterious man in a white mask is supposed to be our main antagonist force. But he is rarely seen and ‘just there’ when he does turn up.

The Vault’s plot lines just sort of collapse rather than end. And I found myself rolling my eyes at the final scene, as I am sure most will. Franco’s presence in the movie is also underused bar a few key scenes, which is a shame. Indeed, Franco looks a little like he’s walking through the motions when it became clear his character wasn’t going to have any really interesting scenes. Considering it was his character’s idea to send the intruders into the basement, there was more that could have been made of that.

And one stock criminal straight up disappears / dies and not a single other gang member even notices his absence. It’s only the family trio of Vee, Leah and Michael that provide any anchorage for the audience to root for. For any effective horror you need to be afraid for the characters, which The Vault doesn’t do enough. But especially for a genre mash up you need to either blend the two perfectly (see ‘Shaun of the Dead’) or basically stick to one but flavour it with elements of the other. The wince worthy western / horror ‘Bone Tomahawk’ is a prime example. The Vault doesn’t commit to either. Instead it switches over from heist to horror half way through, not really doing either justice.

Despite the movie falling over itself in the third Act, it is still mostly well acted and the slow introduction of spooks is well done. You’d be a braver viewer than I not to find yourself gritting your teeth as lumbering ‘hostages’ with bags over their heads keep appearing each time a character looks away. The movie does end up descending into lazy jump scares, however, the mid-section is a very effective nail biter. The Vault just needed a central character growth arc or a more compelling villain-slash-evil presence in order to break out of the safe of ‘genre fun’. As it is, the combination doesn’t quite steal the show. 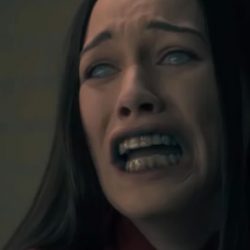