Watch as Jeff Goldblum dives headfirst, in his very unique style, into some topical subjects such as gaming, tattoos and ice-cream in The World According to Jeff Goldblum. Funny offbeat infotainment.

Information isn’t absorbed easily into most brains. Getting us to sit up and pay attention comes down to the presentation, the tone, and the method of delivery. So getting inquisitive actor and laid back icon Jeff Goldblum to host a docuseries covering a grab bag of subjects from such topics as ‘Gaming’, ‘Sneakers’, ‘Ice Cream’ and ‘Tattoos’ is a definitive choice indeed. And that's where we get The World According To Jeff Goldblum.

Goldblum openly admits he has not researched any of the topics he is covering, and so the series is clearly only an entertainment-based glean of any given subject. The modus operandi of each episode consists of ‘let’s plonk Jeff in the middle of some people and watch him produce TV gold’. To be fair, this is a pretty reliable method.

Jeff Goldblum is definitely a man you would refer to as a ‘character’. His gently spoken exuberance is as infectiously genuine as his fashion sense is snazzily quirky. Seriously. Jeff’s ever-changing attire from scene to scene left this reviewer with jealousy and envy throughout. Goldblum typically rocks up to an establishment in some sort of suit or jaunty hat/shirt combo and charms the heck out of his interview subject although, to be fair, a few are non-plussed by his quasi ADHD inability to stick to a sentence without frequently breaking into impromptu song.

The show covers each subject through a Goldblum lens. Typically there will be fun animation that plays over his narration to fill in some interesting history, before Jeff is sent into the wild to talk to some practitioners. His BBQ chats lead him to a bunch of big beardy men who love the art of cooking meat. Although enjoying himself, Jeff does, to his credit, lament the lack of women. Similarly when he visits a denim factory to see how bespoke jeans are made with lasers to distress the material, his buoyant choices clearly wrong foot the guy who just wants to plug his business, rather amusingly.

The producers are clearly aware that, acquired taste or not, Goldblum has a devoted fandom who love his offbeat manner. This is particularly prevalent when, during the Tattoo episode, Jeff pays a visit to Jeff Goldblum Day in his hometown of Pittsburgh. The second annual event in 2019 at the Garfield area Artisan Cafe & Tattoo Gallery featured a slew of fans obviously delighted to see the man himself.

In the midst of an episode full of interesting info about the history of tattoos and science behind how they work, it’s a fun diversion to switch to ogle inks based on Jeff’s filmography and likeness. Indeed, one fan is more than happy to let Goldblum pick up a tattoo gun and, with no experience, use it on the man’s leg. A brave man, indeed!

Even with all the delightful animation and light-touch approach to the subjects covered, your enjoyment or not of The World According To Jeff Goldblum will inevitably depend on how much you enjoy his rather unique manner. For those who find his admittedly scatty brain distracting, it will be hard to get past this. But if you have any love for Jeff Goldblum then this show is skewed perfectly to entertain you on Disney+. 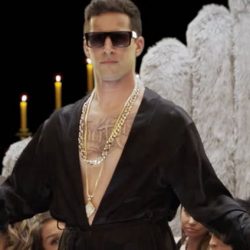