To The Lake is a timely story of a viral pandemic that sweeps through Russia, forcing a dysfunctional but wealthy family to flee Moscow for the safety of a remote lake. A chilling and brilliantly created drama.

The Netflix series ‘To The Lake‘ is a timely story of a viral pandemic that sweeps through Russia, forcing a dysfunctional but wealthy family to flee Moscow for the safety of a remote lake.

Similar to the movie Cargo, this is an apocalyptic drama. However, here the focuse is on a band of families and neighbours who attempt to flee Moscow as a viral pandemic grips the Russian capital.

Once exposed to the mystery virus, death occurs within hours. The pandemic quickly overwhelms the authorities and as law and order breaks down our band of friends and families must avoid contact with the infected, rogue militias, and various assorted lunatics on the way to a remote Lakeside location where the group can find sanctuary. Think Mad Max meets The Walking Dead in a snow storm! Or the Russian version of Black Summer.

What sets ‘To The Lake‘ apart from the typical disaster offering is the character's backstory. The writers have given each cast member a fully fleshed-out persona. It takes almost an hour of the first episode for the character development to be completed, yet it's worth the wait.

Our plucky group of survivors includes a divorcee (Kirill Käro), his new girlfriend, his ex-wife and their child, plus his girlfriend's autistic teenage son. Along with an Oligarch, his young wife, and his drugged up rebellious teen daughter from another marriage. All the things that turn a long road trip into a delightful experience! And I haven't even got to the estranged father yet.

Joking aside, the diverse mix of characters goes a long way to keeping this series fresh and interesting. It's as far from the typical U.S. pandemic movie as you could get. There are no hoards of zombie flesh eaters, yet the series still keeps you on the edge of your seat. The real monsters in this show are the humans the group meet once any semblance of society has broken down.

The visuals and production value on this show are top-notch. It looks great, and the acting is outstanding. Even with subtitles turned on, the actors deliver convincing performances.

Moments of horror are interrupted with slices of humour. You get on the side of these people trying to reach their destination across a disease-ravaged country. It would be fair to say this is the thinking mans ‘Walking Dead‘.

Atmospheric and moody ‘To The Lake‘ has a uniquely Russian style but one that can be enjoyed by everyone. If you like your dystopian thrillers with a tinge of realism, then this is a series for you – unless you’ve had enough of pandemics already, and who could blame you given the current situation. 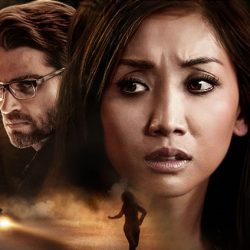