Stuck in a time loop, Carter James finds it impossible to get home to his dog without NYPD Officer Merk killing him in the Oscar-winning Two Distant Strangers.

The ‘stuck in a time loop’ plot device (aka the Groundhog Day effect) is, for me at least, endlessly watchable. It is inherently fun to get characters in a situation with no lasting repercussions and explore what boredom does to someone (check out the recent superb comedy, Palm Springs). It is rarely exploited for dramatic storytelling but 2021’s Oscar winning short film Two Distant Strangers puts the method to metaphorical and literal use. What if a black man got stuck in the loop of being killed by a white police officer?

Over 32 short minutes, Carter James (rapper Joey Bada$$) finds it impossible to get home to his dog without NYPD Officer Merk (Andrew Howard) killing him. He seems destined to offend Merk in some way regardless of how he acts. The movie doesn’t pull its punches when using causes of death that have befallen a spate of black people in the U.S. in recent years, including Carter being choked out by Merk and desperately gasping, “I can’t breathe!”.

Clearly, this is a very serious subject matter, yet writer and director Travon Free is careful to ensure the short running time isn’t entirely grim viewing. We’re allowed the first 5 minutes of getting to know Carter and his normal life. He’s stayed over for the night with Perri, an attractive woman (Zaria Simone) who may have viewed the night as something more casual than he hoped for. Their dialogue is gentle, witty, warm, and inevitably where Carter is going to reset his days, because as he tries to leave and accidentally bumps into a (white) bystander, Officer Merk’s suspicion is piqued.

The clever element of the script is to highlight how depressingly inevitable each scenario plays out. The first time may have started due to Carter receiving some attitude from a passing New Yorker, but no such thing happens with later iterations and yet he still can’t get away. Once presumed guilty of something, everything said or done is seen as an escalation. As the movie progresses Carter tries other ways to engage with his unending murderer, playing out a ‘see?’ to those who seek to defend the heavy-handed actions of policing. Howard puts in a suitably grotesque performance as Merk but it flirts with going too far into ‘strawman’ territory which risks devaluing the message.

“That’s just the way it is,” floats the famous song by Bruce Hornsby and the Range over the end credits; a damningly long list of black people killed by police coupled with the innocuous or non-threatening things they were doing at the time. Two Distant Strangers is a hard watch, tempered by a short run time and touches of lightness to accentuate the dark. It is unsubtle – virtually turning to the camera to make sure you are following it at times – but when subtlety has achieved so little over the nearly 60 years since the civil rights movement you can understand a movie simply holding up its hands and saying “enough”. 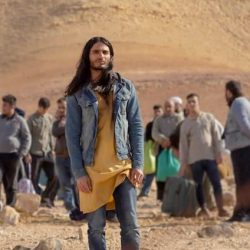