Wine Country brings together some of the funniest female actresses working today. However, other than one or two laugh out loud moments, it's less comedy and more friendship drama. Similar to Someone Great about 40 somethings rather than 20 somethings. Could have been funnier!

Directed by and starring Amy Poehler, Wine Country is a perfect blend of comedy and friendship. She plays Abby, one of six friends who head to Napa Valley to celebrate Rebecca's 50th birthday. Highly strung and the organiser of the event, Abby has diarised every minute of the trip. Which is much to the annoyance of her friends who would be quite happy to just kick back and drink wine for the weekend.

Through the trials and tribulations of the trip and with plenty of vino consumed, the friends find themselves getting increasingly snippy with each other. Most of which is understandable as they haven't spent this much time together in many years. But it's all peppered with some good laughs and is ultimately a feel-good movie with a happy ending.

Wine Country is exactly what it says on the tin – a movie about middle-aged friends who get drunk and say and do silly things. There really isn't much more to it than that. However, it is disappointing if only because the cast is packed full of hugely talented and funny women who are seriously underutilised. In fact, other than Paula Pell who plays Val, none of them are very funny. They all have such serious back stories that it becomes tricky to find the comedy.

Catherine (Ana Gasteyer) plays a workaholic who spends the entire film stressing over one business decision. Rebecca (Rachel Dratch) is the birthday girl and a therapist who can see she's married to a jerk. Naomi (Maya Rudolph) is a stressed mum who is avoiding the results of a potential cancer diagnosis.

Jenny (Emily Spivey) doesn't really want to be there and is anxious about everything. Abby (Amy Poehler) is hiding the fact that she lost her job. And even Val (Paula Pell) is hiding the sadness and loneliness she feels being single.

So six for six on the sad life front. And yes, that does allow the viewer to empathise and relate. Especially women who see themselves and their friends in the characters. But it also means there is more drama and poignancy than actual laugh-out-loud moments.

For all that, at least Wine Country is unpretentious. It's not pretending to be something it's not. And ultimately it's a movie about getting older and knowing who your true friends are. So for that, it's worth watching. 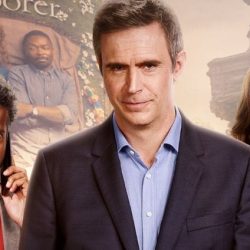