Like an Aussie version of Great British Bake Off but with desserts. Headed by master patissier, Adriano Zumbo, Just Desserts follows 12 home cooks as they battle it out for a $100,000 dollar prize. Sound premise, it's just a bit repetitive and needs an injection of life.

If you don't know who Adriano Zumbo is then you probably don't watch MasterChef Australia. Known for his incredible dessert creations, Zumbo regularly features on the hit Aussie show. Usually though, it's to set a pressure test of epic proportions for the unsuspecting competitors. He is one of Australia’s most celebrated patissiers and has also guest judged on Sugar Rush (review here).

Such is his following that Netflix commissioned Zumbo's Just Desserts. It's a baking/dessert making competition set in Australia. 12 reasonably decent home bakers are tasked with creating masterpieces of various themes each episode. One wins, the two least successful fight it out to recreate a Zumbo test. The worst goes home.

With 12 episodes in total, the last episode sees the two remaining contestants battle it out for the grand prize of $100,000 (Aus) and the opportunity to have one of their creations feature in Zumbo cake shops across the country. It's a pretty decent prize to be fair. Likewise the premise of the show is solid but it has some failings.

The setting is in a Willy Wonka style factory which kids will absolutely love but the effect doesn't translate very well. It feels more like a warehouse that has been constructed for the show. We are also supposed to believe that the dessert task in each episode comes as a shock to the contestants. I don't know about you but if I was asked, with no notice, to create a sweet treat that had to defy gravity I would fall over laughing then leave! At least in the Great British Bake Off they know what's coming up and it's believable.

Zumbo himself judges the creations along with chef Rachel Khoo. Unfortunately for Rachel she comes across like a wax work. Seriously, if she has a personality, they have gone to extreme measures to ensure it isn't shown. Zumbo by contrast is quite a likeable guy. The problem is that he doesn't interact with the contestants at all. They bake, he judges.

Yes the creations are amazing. Zumbo's own creations are phenomenal. They are works of art. And honestly, if it was a show about him making them then it would be much more interesting. 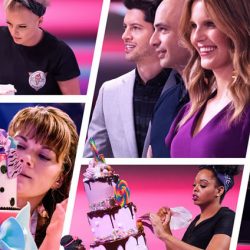