The name's Craig – Daniel Craig… Yes, he's back, after all the speculation and five years after Spectre. James Bond is finally back in – No Time to Die.

No Time to Die is the twenty-fifth film in the James Bond movie franchise. No matter what walk of life, everyone loves James Bond. The British Secret agent created by Ian Flemming has spawned one of the biggest movie franchises of all time. One of the biggest arguments has revolved around who is the best Bond. I am sure you will agree with me when I say, Daniel Craig is easily up there as a contender.

Daniel Craig was very vocal in his choice to make Spectre his last appearance as the super spy. So this new Bond movie was always going to face some issues right from the get-go. Danny Boyle of Trainspotting was listed as the Director until he left the project five months later due to creative differences. But after a quick swap around of scriptwriters and a new director onboard – Cary Fukunaga. Bond 25, now has a dedicated release date and a brand new teaser trailer. Judging by the onset video released by the director, it looks like they are having heaps of fun making it too.

Picking up straight from where Spectre left off. Bond is no longer in active service and is taking things easy in Jamaica. Until Felix Leiter drags his old friend into a rescue attempt that pits Bond against a new enemy, equipped with new technology of the kind never seen before. But it is not just Bond's enemies with new equipment, just check out the new Aston Martin Valhalla which Bond will be driving along with the DB5 and Aston Martin V8 Pictured. 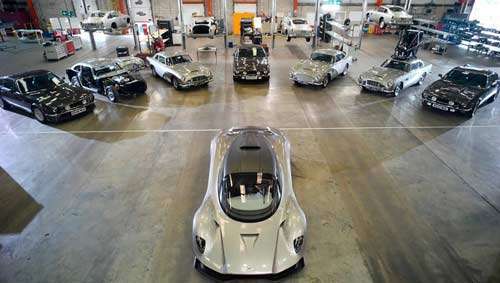 You will be glad that all of the amazing acting talents will be reprising their roles. Ralph Fiennes, Ben Wishaw, Naomie Harris, Rory Kinnear, Jeffrey Wright and Lea Seydoux are all back. With a possibility of Cristoph Waltz returning Blofeld too. Oscar-winner Rami Malek is the big surprise coming in as the new Bond villain.

One thing is for sure since Skyfall, Bond movies have taken a huge leap forward and we can expect something truly special from this latest outing.